Taylor and Southee to fore in win 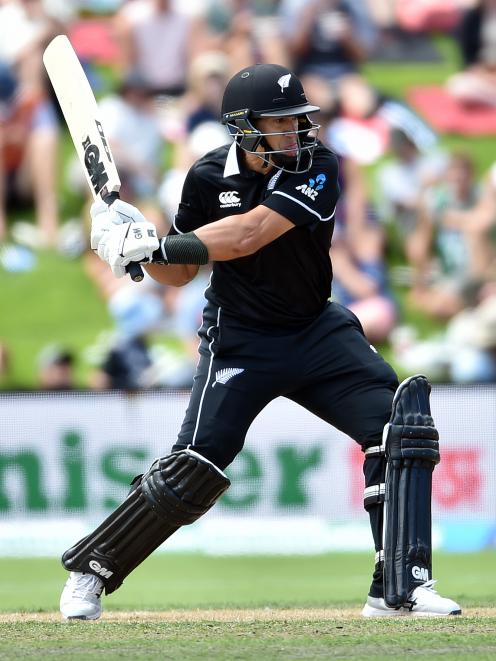 Black Caps batsman Ross Taylor hits out in his innings of 69 yesterday at the University of Otago Oval. Photo: Peter McIntosh
If that was Ross Taylor's last international innings in Dunedin, then it was a fitting way to sign off.

The veteran right-hander helped the Black Caps pile on 330 for six and register a convincing 88-run win against Bangladesh in the one-day international at the University of Otago Oval yesterday.

The seamer took six for 65 - his first five-wicket bag in four years - and scooped up the man of the match award.

But for many the match will be remembered for a couple of significant milestones.

Taylor, who cruised to 69 without really stepping out of his comfort zone, slashed his trademark cut shot to the point boundary to reach 8000 ODI runs.

The 34-year-old right-hander was the fourth-fastest of all time to reach the mark by number of innings (203). Only Indian greats Virat Kohli (175 innings) and Sourav Ganguly (200) and South African AB de Villiers (182) managed the feat more quickly.

Polite clapping gave way to a standing ovation shortly after when he overhauled Stephen Fleming as the leading scorer for New Zealand in ODIs.

He tucked a delivery from Mehidy Hasan around the corner to eclipse the mark of 8007 runs.

Henry Nicholls played a solid hand as well with 64. He combined with Taylor in a 92-run stand for the fourth wicket which helped put the Black Caps on course for a 300-plus score.

Some lofty blows from Tom Latham, who made 59, and Jimmy Neesham, who chipped in with 37, helped the Black Caps push beyond 300, and Colin de Grandhomme underlined his ability with the bat at the death. He clubbed 37 not out from just 15 deliveries.

Southee did the rest. Back after a spell on the sidelines following a prolonged form slump in the format, New Zealand's most experienced bowler silenced some of his critics with a tremendous spell.

He out-thought opener Tamim Iqbal, who charged the bowler and swung hard. Southee pushed it a little wider and got the edge. Latham took a terrific catch higt to his left.

Soumya Sarkar lasted just two balls. His second delivery was nearly unplayable. Southee hooped it back from out side off and hit middle.

Wicketkeeper-batsman Liton Das was next to make the lonely walk back. He was trapped in front from Southee, who had three for two after two overs.

Trent Boult looked lively at the other end as well and picked up the wicket of Mushfigur Rahim (17), who tried to flick a delivery off middle down leg but got a top edge.

For the third time in the series, Bangladesh found itself five down for not many and certainly not enough.

Sabbir Rahman led the fight back with a sparkling century. Despite his knock of 102, there was no recovering from 61 for five.

While the crowd of 4227 was denied a thrilling finish, it was treated to a clinical performance by the home team in its last hit-out before the World Cup.

The Black Caps also wrapped up the series 3-0.