Tributes are flowing for a great New Zealand sports journalist, Don Cameron, who has died in Auckland after short illness. He was 83. 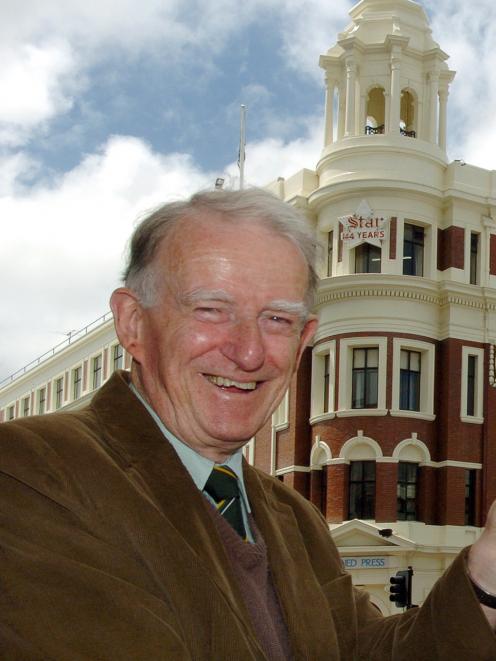 Don Cameron on a trip to Dunedin. Photo: Stephen Jaquiery

DJ Cameron wrote about cricket, rugby and yachting for the New Zealand Herald from 1950 to 1998. For much of that period he was the chief cricket writer, with a stint as the chief rugby writer, succeeding TP McLean.

Former Herald editor Tim Murphy ran into Cameron at the Sacred Heart-King's First XV match a few months ago and said he was in good spirits then, although looking frail.

"He was one of the greats of sports journalism. Some said he was florid, but he could do high-minded, descriptive intros and stories that were very powerful," Murphy said.

"He was very hard-working and would do interviews for other sports when away on tours."

Colleague Lindsay Knight, who worked for the opposition Auckland Star newspaper, did several All Blacks tours with Cameron and has only fond memories of him.

"I had a lot of time for him as a person and as a journalist. He was very helpful to me, although I was 10 years younger and we worked for different papers. He was always very helpful to young journos generally and I was one who benefited from that," said Knight.

"He was a very good rugby writer and an even better cricket writer, and he formed a formidable partnership with TP in the 1950s and 1960s. They were as strong a pair of rugby writers as you could find."

Cameron often travelled on the Auckland team bus in that period, playing euchre with the card sharks and formed close relationships with many players of that era, a scenario unthinkable in today's tightly-controlled media age.

In later years, he wrote a popular column for Rugby News magazine and his cricket work appeared in Wisden until recent times. In the 1970s, he edited New Zealand Cricket magazine.

Cameron was a highly-respected member of the NZ Barbarians club.

As a life member of the NZ Sports Journalists' Association, he lent his name to the DJ Cameron Young Writers' Award. This journalist was proud to win the award in 2004.