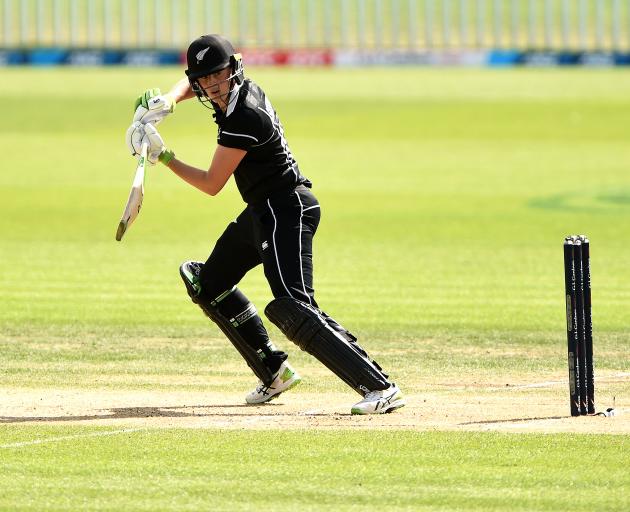 Amy Satterthwaite, of New Zealand, steers the ball late during her unbeaten innings of 119 against England at the University Oval in Dunedin yesterday. Photo: Getty Images
Finally.

The White Ferns snapped an 11-game losing streak in one-day cricket with a convincing seven-wicket win against the world champion England side at the University of Otago Oval yesterday.

There must have been frustration, though. It was game three and the series was already lost.

But there is pride as well.

The home side produced a tidy effort in the field and dismissed England for 220.

Wrist spinner Melie Kerr shone with ball and bat. She nabbed four for 42, then featured in a record fourth-wicket partnership with Amy Satterthwaite.

Satterthwaite notched her seventh century in the format and went past 4000 career runs in the process. 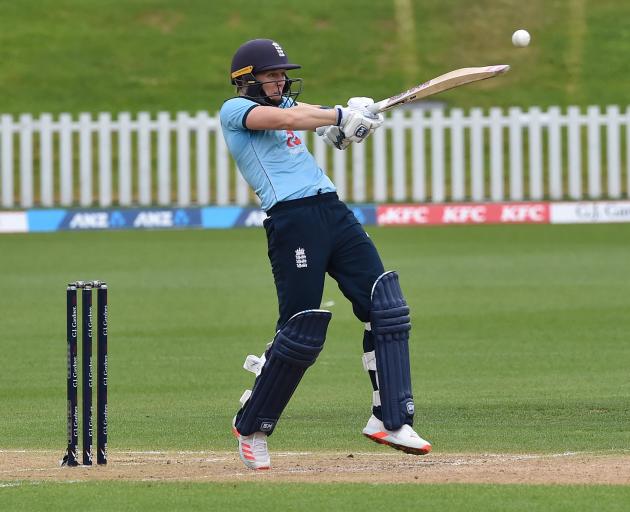 Heather Knight hits out for England during its innings. The White Ferns won by seven wickets.PHOTO: GREGOR RICHARDSON
She laboured early, but was nailing some very crisp shots towards the end of her undefeated innings of 119.

And Kerr proved to be a brilliant foil. She struggled initially as well, but got the pace of the pitch and was able to pull out a few more shots in her 72.

Knight played nicely for 60, but her departure signalled a change in fortune for her side.

‘‘The time that I got out we felt we were just getting going,’’ she said.

‘‘The Kiwis were great in how they chased it down. I thought Amy was outstanding and Amelia as well.’’

Jess Kerr secured an early breakthrough for the White Ferns.

She got a delivery to hoop back and glove Danni Wyatt.

In-form opener Tammy Beaumont and Knight put on 109 for the second wicket to set up a solid platform.

Knight was given out lbw on 26. It was straight enough for umpire Billy Bowden to raise a crooked finger.

But Knight used a review, and any concerns about height were magnified when ball tracking showed it passing over the top of middle.

Beaumont saved herself in very similar fashion. Melie Kerr got a wrong-un past her defence and got the nod from Bowden.

But the umpire’s decision had to be overturned — it was going over again.

Bowden finally got an lbw to stick. Knight went back to a delivery from Kerr, and this time there was no room for the ball to go over.

It proved to be a turning point.

Beaumont continued, though. She cut the ball to the backward point boundary to raise her third half century of the series.

White Ferns seamer Hannah Rowe picked up a quad strain and was unable to return. But the home side was able to make some progress through the English middle order without her.

Nat Sciver got a leading edge on 12 and Amy Jones offered a return catch to Jess Kerr.

Fran Wilson’s first bat of the series ended with her dragging on a full toss from Sophie Devine for six.

The squeeze was on and Devine, Melie Kerr and Hayley Jensen all rattled through cheap overs.

And a steady supply of wickets ensured the tourists were not able to bat out their overs.

Beaumont was left stranded on 88.

The Ferns made a tentative start to their reply. Natalie Dodd nicked out for three and

Jensen (8) was fooled by a slower delivery from Sciver which gripped.

When Devine was trapped in front for 15, the White Ferns had slumped to 51 for three, before battling back to win comfortably.