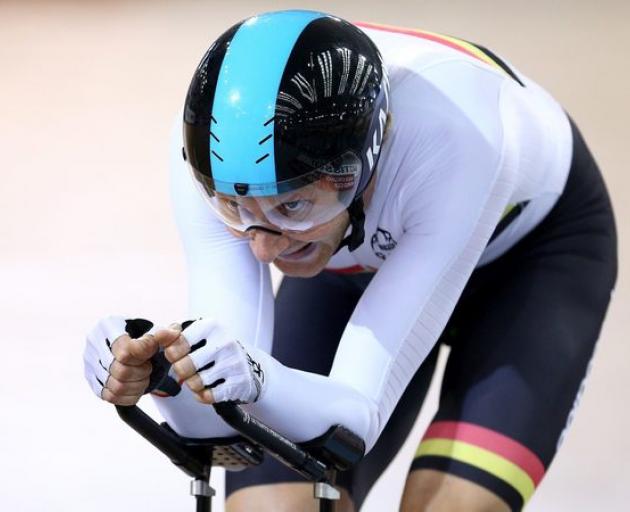 It's Hamish Bond's first national title on the track. Photo: Dianne Manson via RNZ
Former Olympic rowing champion Hamish Bond has set a national record on his way to victory in the the 4000m individual men's pursuit at the Track Cycling Nationals in Cambridge.

It was Bond's first national title on the track yesterday, with his national record in qualifying among the top-10 fastest times in history at sea level.

James retained her title by just 14/1000ths of a second in a remarkable final with Holly Edmondston.

James' winning time of 4:28.311 is a new personal best and broke the national all comers record, with Edmondston a whopping 12 seconds under her previous best in claiming the silver.

"I am really pleased to back it up and go faster in the final. In qualifying I went too hard in the middle section and blew up a little bit. The evening ride was more consistent," said James.

"I had no idea what Holly was doing. I was just riding to my schedule and that is the fastest ride I could have done.

"I am so proud of us four team pursuit girls in the finals, with Rushlee fighting back from her morning ride and Holly tonight riding a world class time. It shows that as the competition grows between us that we all benefit and collectively hopefully we will go faster."

Bond, who has switched his attentions to the track after two years pursuing the time trial on the road, clocked a superb 4:12.436 to top qualifiers, going under the previous national record by a second.

In the final, he was behind midway through but rallied to win in 4:14.516 over Kerby.

"I had to really grit my teeth to get one over Jordan. Being an ex-world champion, he was a really good scalp to beat in a final," Bond said.

"I always had a really good kick at the end of the race in rowing and it is similar in the pursuit in cycling. In those last few laps you think you are in top gear but there is a secret sixth gear where you shut your eyes and grit your teeth and muscle out a few laps at the end. That was the case tonight."

Dylan Kennett rode an excellent 4:13.728, a fraction outside his old national record, claiming the bronze medal over Tom Sexton.