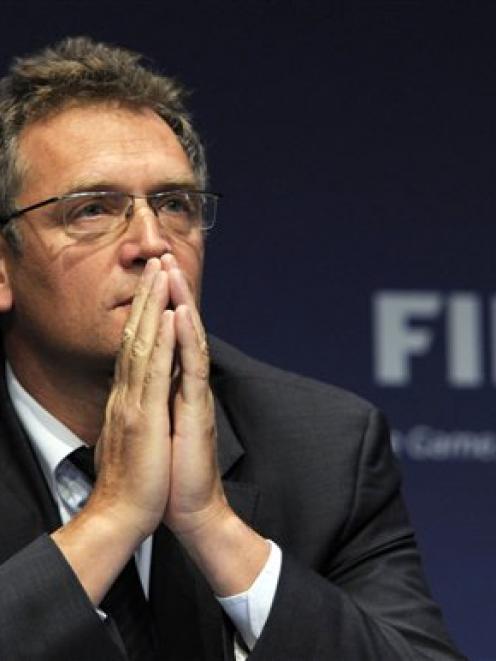 Executive committee members Amos Adamu of Nigeria and Reynald Temarii from Tahiti are barred from all football-related duty until the probe ends, said Claudio Sulser, chairman of FIFA's ethics committee. His panel is scheduled to meet again between November 15 and 17.

FIFA's ethics committee will also continuing investigate whether two unnamed bidders competing for either the 2018 and 2022 World Cups engaged in collusion.

"Today is a sad day for football," FIFA president Sepp Blatter said, asking for time to restore FIFA's credibility. "We have to fight for respect and especially we have to fight that the people here in charge of FIFA behave as they should do. Our society is full of devils and these devils you find them in football."

FIFA's executive committee, led by Blatter, will select the two World Cup hosts in a December 2 secret ballot in Zurich.

FIFA launched investigations after British newspaper The Sunday Times alleged Adamu and Temarii offered to sell their votes for funding toward football projects.

Amadu was filmed by undercover reporters requesting €580,000 to build four artificial football pitches in Nigeria, and for the money to be paid to him directly.

"The decision to provisionally suspend these officials is fully justified and should not be put in question," Sulser said. "The evidence that has been presented to us today has led us to take this provisional measure, as we considered that the conditions were definitely met to take this decision and we deem that it is crucial to protect the integrity of the 2018 and 2022 FIFA World Cup bidding process.

"We are determined to have zero tolerance for any breach of the code of ethics."

The 2018 tournament will be held in Europe with four candidates: England, Russia and the joint bids by Belgium-Holland and Spain-Portugal.

The 2022 hosting rights race was between the United States and four Asian confederation countries, Australia, Japan, Qatar and South Korea.

FIFA barred bidders from making agreements with other candidates, and insisted they must act with "integrity, responsibility, trustworthiness and fairness."

The Sunday Times - which has given FIFA full video copies and transcripts of its evidence - kicked off a dramatic week as FIFA seeks to maintain the integrity of the bid process.

"No one will be able to say that the process and the decision on December 2 can be challenged because we have not done everything to ensure that the decision is a fair and transparent decision," FIFA secretary general Jerome Valcke said.

Temarii, the Oceania Football Confederation president, met FIFA president Blatter on Sunday and asked to clear his name before the ethics committee.

The 43-year-old former professional player was filmed asking for NZ$3 million to fund a football academy in Auckland.

"I'm confident about my integrity but I made a mistake by talking in that way," Temarii told The Associated Press on Sunday.

Valcke said some allegations about collusion and bidders' behavior were "just rumors" but they would be investigated.

FIFA does not have direct power to fire members of the 24-strong executive who are elected by their continental bodies.

However, its code of ethics for officials says those who "severely fail to fulfill, or inadequately exercise, their duties and responsibilities, particularly in financial matters, are no longer eligible and shall be removed from office."

Adamu's four-year term ends at the Confederation of African Football's congress being held on Feb. 23 in Khartoum, Sudan. The 57-year-old former physical education teacher joined FIFA's executive in 2006, succeeding Botswana's Bhamjee who resigned after a ticket scalping scandal at the World Cup in Germany.

Temarii, who has led 11-nation Oceania since 2004, is scheduled for re-election at a Jan. 21-23 congress on his home island.

Among the other officials under suspicion, Fusimalohi is Temarii's predecessor as Oceania's representative at FIFA.

Aloulou, a Tunisian lawyer who chairs FIFA's disputes resolution panel, and Diakite, a Malian member of the referees' committee, reportedly said to the Sunday Times that FIFA voters should be offered bribes of about $1 million (€725,000).