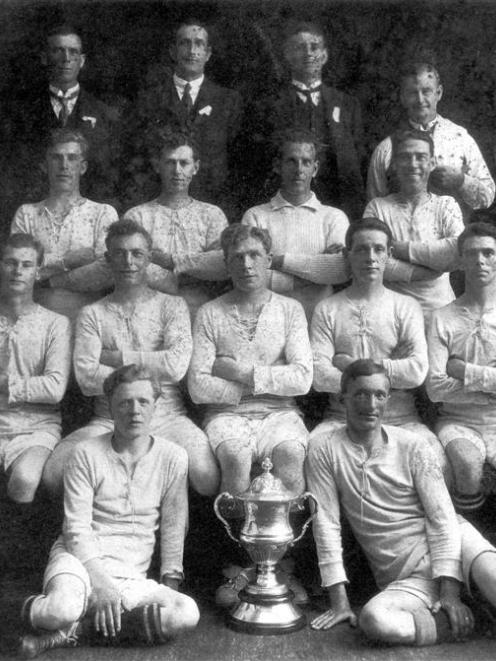 Arriving by rail at Seacliff to the looming Gothic towers of the mental hospital would not normally have been an auspicious event.

But, in October 1923, the Seacliff football team disembarked at the railway station to rapturous scenes.

Seacliff had won the Chatham Cup in Wellington, beating the YMCA side 4-0 in the first edition of New Zealand club football's marquee event.

Modelled on England's FA Cup, the Chatham Cup was introduced by the New Zealand Football Association following a gift from the crew of HMS Chatham.

The light cruiser was loaned to the Royal New Zealand Division of the Royal Navy in 1921, and made regular visits to New Zealand ports. This inspired the crew to give the Chatham Cup to the NZFA in December 1922.

Seacliff's football team was also formed in 1922, under the auspices of Dr Alexander McKillop, the mental hospital's medical superintendent. Frank Tod wrote in his 1971 Seacliff history that McKillop ''was a keen supporter of soccer and his staff of attendants included a number of Scotsmen who were recognised as superior players''.

The Seacliff team played on a ground at the hospital head attendant E.C. Treweek remembered as being ''rather small for football''.

Treweek, who worked at the hospital for 40 years, also reported that a team from HMS Chatham regularly visited for a friendly game when the ship was in port.

''They were always entertained well and I believe it was this that prompted them to present the beautiful Chatham Cup. If I remember rightly, it was first handed to Seacliff after a game with the ship's team.''

If he was right, Seacliff actually won the Chatham Cup for the second time in the 1923 final in Wellington.

Various football associations throughout the country chose different methods of deciding which team from their regions would qualify. This meant that Seacliff and YMCA had very different routes to the final. YMCA had to beat Waterside, Porirua Hospital, Nelson Wanderers and Dawbers Motor Company to reach the North Island final. At Athletic Park, two days before the final, YMCA beat a strong Huntly team that included Scottish coalminers well-versed in football.

South Island entries were few, so Seacliff merely had to beat Oamaru Rangers in the South Island final on August 25, 1923. This it achieved with a 7-0 win in Oamaru, prolific centre forward Bill Hooper scoring five goals.

Hooper was one of five members of the Seacliff team who would later represent New Zealand. Winger Malcolm MacDougall, midfielder Bill Murray, Hooper, and fullback brothers George and Jock Anderson all played against either Chinese Universities in 1924, or Canada in 1927.

They were joined in the Seacliff side by Charlie Rivers, Bill Rogers, Hugh McKechie, Reg Baxter, Tommy Burns and Wattie Hanlin, and were trained by Howie Kerr and managed by William Elwood.

In between the South Island final and the Chatham Cup final on October 1, Seacliff hosted the Porirua Hospital team. Losing 3-1 would not have instilled much confidence in Seacliff ahead of the rail and steamship journey to Wellington, where it arrived on the Sunday morning before the final.

Attendance at the first Chatham Cup final was disappointing, perhaps because it was played on a Monday. According to the Evening Post, spectators ''were treated to some bright passages of play, especially on the part of the visiting forwards, who showed a sound knowledge of the game, and combined well''.

With a 3pm kick-off at Athletic Park, YMCA won the toss and chose to play with the sun on its back.

In the second half, YMCA again began on the offensive but was swiftly shut down by the Anderson brothers, who were ''carefully guarding their citadel'', according to the Evening Post.

The Wellington side missed several good chances, and was again punished by Seacliff as ''a fine piece of combined work ended in MacDougall finding the net with a great shot from a difficult angle''.

As YMCA, carrying two players who had sustained injuries, flagged, Seacliff scored twice more. MacDougall turned provider for Baxter to score, and Hooper added another to his tally.

The 4-0 scoreline inspired headlines including ''Local Men Outclassed'' and ''Easy Win For Seacliff''. And the gravity of the occasion certainly was not lost on the winning team, with the Evening Post reporting ''enthusiastic scenes at the close of the match, several members of the winning team being carried shoulder high from the field''.

Seacliff was presented with the Chatham Cup by Wellington Mayor Robert Wright, before travelling to Porirua for the night. The following afternoon, it played a return match against Hospital, before embarking on the journey south.

Seacliff gave the team a ''tremendous welcome'' upon its return with the silverware, Frank Tod wrote.

''Residents from near and far turned up at the railway station to greet the team and a triumphant procession led by Piper Duncan Cameron proceeded to the hospital.''

Treweek had organised the pipe band for the reception, and due to this Dr McKillop requested that he lead the procession.

''I had the honour of heading the procession back to the Hospital, carrying the beautiful cup, which was stated to be insured for 300.''

The small ground at Seacliff Mental Hospital was enlarged towards the end of 1923, and the Seacliff team remained a force throughout the decade. It reached Chatham Cup finals in 1924, 1925, and 1929, losing to Auckland Harbour Board (3-1), Wellington YMCA (3-2) and Auckland's Tramways (4-0).