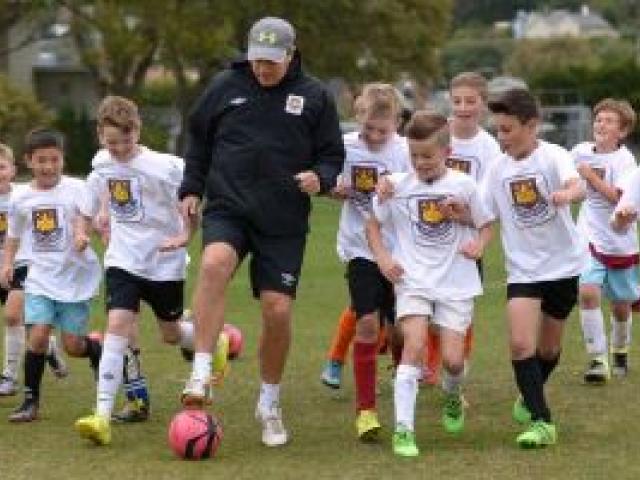 About 60 footballers, aged between 7 and 17, were at the ground yesterday and Thursday for coaching clinics run by the West Ham United Oceania Academy.

Cowie, who made nine appearances for West Ham and later coached the Solomon Islands national team and the Papua New Guinea under-23 side, said there was no reason more New Zealanders could not follow in the footsteps of All Whites captain Reid, a West Ham player since 2010.

"At 7 years old, the talent is equal from Dunedin to London, to Aberdeen, to Brisbane - where I live.

"But as they get older, the gap widens, because they need quality coaching from a young age.''

While Cowie was running a football tour in the UK several years ago he was asked by the West Ham United International Academy if he wanted to take the programme to Australasia.

The academy has been to Australia five times since then and first came to New Zealand last year.

It ran a camp in Invercargill earlier this week and would run camps in Wellington and Auckland in July.

The best players from the regional sessions would be invited to a four-day national training camp in Auckland in September.

Players who excelled there would be given the chance to visit the West Ham United Academy in London.

Fleming said about a third of the players who attended the Invercargill and Dunedin camps would be selected to go to Auckland.

He hoped to strike a ten-year deal with the West Ham academy so the initiative was not a "fly-by-night thing''.

Cowie was also based in Australia and played more than 600 games as a senior professional in the UK.