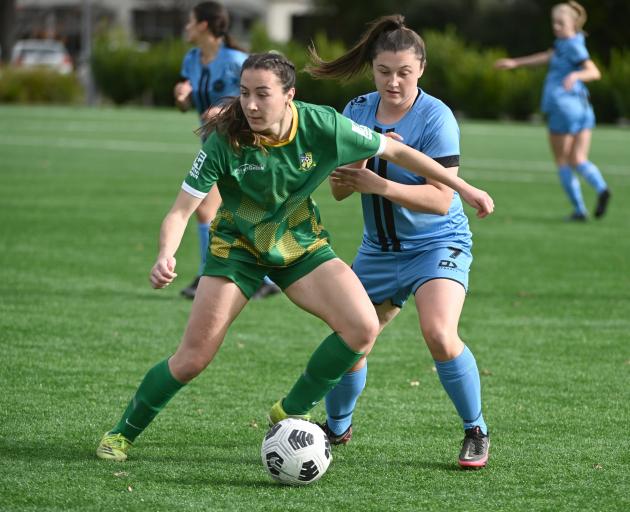 Green Island’s Kate Johnstone (left) shields the ball from Dunedin City Royals player Mya Robinson in their Kate Sheppard Cup clash at Logan Park yesterday. PHOTO: LINDA ROBERTSON
In the opening round of the Chatham Cup, Queenstown, the Dunedin City Royals, Green Island and Mosgiel all had byes into the next round, meaning there was an opportunity for a cup upset, but all the matches went to form and produced plenty of goals.

The standout performers were Roy Hibbert, who bagged a hat-trick, and Tyler Muir who claimed a double hat-trick inside 52 minutes. Ethan Stout scored both his team’s goals.

Roslyn Wakari make light of its away trip to beat Gore 6-0. Nathan Wilkie was the star with a hat-trick.

Luke Williams opened the scoring on 13 minutes and Ben Williams-Davies claimed a quick-fire brace either side of halftime.

Joining Roslyn in the next round over Queen’s Birthday Weekend is Queens Park which raced to an early 4-0 lead over the travelling Grants Braes team, Juan Sebastian Castillo-Viveros scoring a hat trick in the first 26 minutes.

Otago University looked to be coasting through to the second round away to Wanaka yesterday after Harry Kidd’s opener and Sam Murray’s brace put it 3-0 up just before halftime.

However, Angus Campbell pulled one back on the stroke of halftime and then, within 11 minutes of the restart, Wanaka was level after Blair Scoullar and then Steve Pleskun scored.

Sam Murray proved to be the hero in extra time as he kept his cool to score from the penalty spot in the 108th minute to give University the win.

In the women’s competition, Otago University required extra time to overcome a resilient Queenstown in the Kate Sheppard Cup at the Logan Park yesterday.

The scores were locked at 0-0 after 90 minutes and it took ex-Queenstown player Amy Hislop to break the deadlock in the 93rd minute.

Jess Fuller made sure of the win when she made it 2-0 in the 96th minute.

The Dunedin City Royals were too strong for Green Island, winning 7-0 after Margarida Dias opened the scoring after 20 minutes.

She completed her hat-trick and the scoring in the 82 minute. Toni Power, Chelsea Whittaker, Nieve Collin and Emily Morrison also scored.

Rosyln Wakari, which overcame a plucky Northern side, was ahead 2-0 at the break through goals to Emma Black and Jemma Wilson but had to wait till the last 13 minutes when three more goals through Wilson and substitutes Holly White and Sophia Brady saw Roslyn through to the next round.