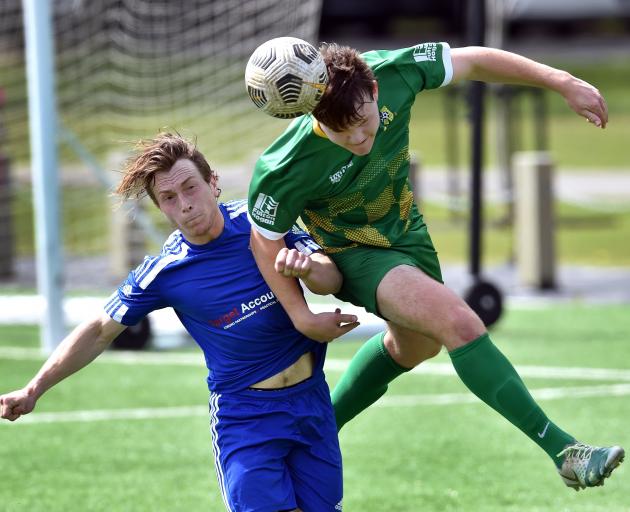 Green Island player Cam Brewitt gets to the ball before his Mosgiel opponent Rhys Quarrell in a Football South promotion-relegation game at Logan Park on Saturday. PHOTO: PETER MCINTOSH
Adam Hewson's late goal would have been of little consequence on any other day.

There was no doubting its significance as Green Island's celebrations rang out at Logan Park Turf on Saturday, though.

Perhaps more revealing was the frustration turning to despair on the Mosgiel side.

Hewson collected a long ball and coolly finished to make it 3-0 just minutes from full-time.

With that, the hill Mosgiel had to climb to achieve promotion to football's South Island league became more like a mountain.

Green Island's three-goal buffer will leave it as strong favourites to win the two-game playoff, which continues at Tahuna Park this Saturday.

Had Mosgiel taken its chances early, it could have been a different outcome.

If rust was expected from the challengers, who had not played in two months, it was not evident — except in their finishing touch.

Mosgiel played well between Green Island's midfield and defensive lines, before exploiting the space in behind.

Yet Mosgiel could not finish things off and despite all of its endeavour in the first 20 minutes, it was Green Island that led early.

A bicycle-kicked goal from Matt Brazier, following a free kick delivery from Cam Anderson, made it 1-0 in the opening minutes.

Mosgiel nearly hit back straight away.

Captain Rory Findlay hit the post and while the rebound went to Brook, he was unable to convert.

It was Mosgiel's best chance of the match, although it had another good one when Quarrell shot wide to the right after being played into space by Brook.

Green Island began working its way into the game and had the better of the latter stages of the first half.

However, it was unable to generate any clear chances and could only take its 1-0 lead to halftime.

Twice it looked to extend its lead early in the second half. Both came up short.

Hewson was denied by a fantastic save from Mosgiel keeper Daniel Robinson, before Anderson shot wide shortly after.

Mosgiel could not keep it out a third time, though.

Green Island began to look more threatening as the match wore on, notably through Hewson's chaotic runs up the right wing.

It was a break up that wing which led to Max Johnston being fed the ball in front of the goal.

Initially the Mosgiel defence did well to disrupt him.

But it was unable to clear and Johnston poked home a second goal midway through the half.

At 2-0 Mosgiel remained very much in the tie, although it struggled to produce any genuine chances in the second half.

Fitness would have become a factor with the extended break for Mosgiel, and it began to show.

Frustration crept in too.

That became notable when a challenge from Anderson, which was awarded a yellow card, sparked several Mosgiel players to crowd the referee in protest.

Whether the players’ minds were still on the game by that point may have been a fair question.

Moments later Hewson was put into space far too easily up the right wing.

He dispatched the third goal to give Green Island a healthy lead heading into leg two.