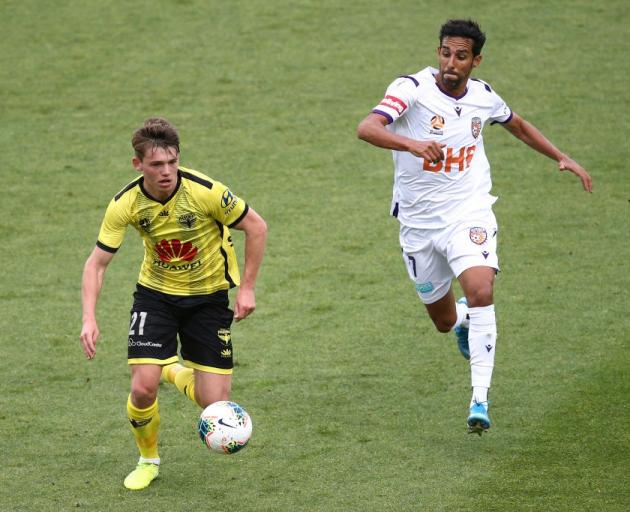 Callum McCowatt controls the ball for the Wellington Phoenix as the Perth Glory's Jaunde comes across on defence. Photo: Getty Images
As a kid growing up, there was one poster that took pride of place on Callum McCowatt's bedroom.

The Phoenix midfielder, who could make his international debut on Friday morning (NZT) against Ireland, got into football the typical way, having a kick around in the park with his mates.

He played for fun for many years, but always had big dreams, as he ran around for Greenhithe football club.

At the tender age of 20, he's on the cusp of achieving that dream, likely to get game time at Aviva Stadium on Friday (NZT).

It continues a rapid rise for the Aucklander, who has demonstrated an ability to stand out at each new level.

He impressed for Auckland City as an 18-year-old in the ISPS Handa Premiership, and his aptitude for the big occasion was shown at the 2017 Club World Cup in Dubai, playing his natural game on an international stage.

McCowatt was the shining light for Eastern Suburbs last season, with two memorable goals in the grand final and also impressed for the Junior All Whites at the Under-20 World Cup in Poland.

McCowatt already has some strong attributes.

He seems to find time on the ball where others can't, has good vision for a pass, makes clever runs and is a natural finisher.

"It's great to see young guys coming through with different kinds of skills," said teammate Ryan Thomas. "It's a change from the past when they were all big bodies and played a certain way."

McCowatt's precociousness has been demonstrated at the Phoenix, as he got the nod ahead of several seasoned professionals to gain a starting berth, in his first step away from amateur football.

"It's been a little bit tough," admits McCowatt. "It's a bit quicker and players are a bit smarter but I am enjoying the challenge of trying to step up and play to that level every week. It's about being as consistent as possible. That's key, get in and work hard every day."

His football journey started as a five-year old, when his Mum took him down to the local club Greenhithe.

"I was in a similar group from five to 13," said McCowatt. "We were all good mates, we were just having fun."

A brief stint at Forrest Hill-Milford was followed by time at East Coast Bays. McCowatt then shifted south to the Ole Academy, one of many national team alumni from that Wellington base.

"They treat triallists quite different," admitted McCowatt. "Players don't want to lose their spot to a trialist so it's quite lonely at times, [but] it helped me with where I am at now."

Earlier this year McCowatt was offered a contract at Danish club Helsingor, but turned it down.

"At the time it was a tough decision, but I wasn't sure it was the right environment for me to progress as a footballer," said McCowatt. "It's always hard to say no to club if they offer you a deal but I think it was the right call."

"I'm still growing, getting stronger, developing," said McCowatt. "The stars need to align to get over there [Europe] but I am happy to be at the Phoenix now."