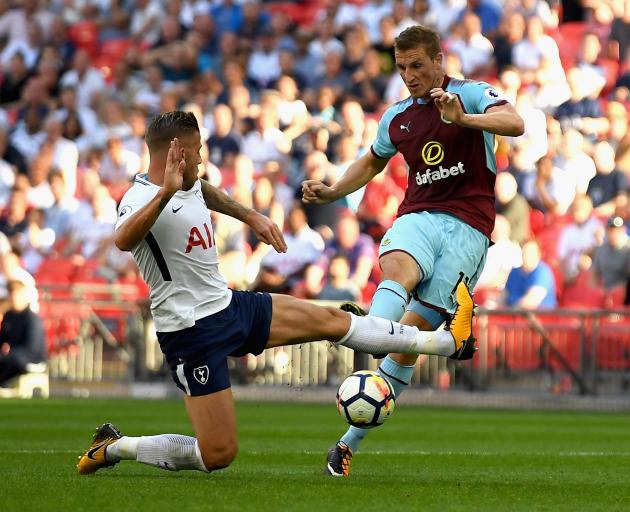 Chris Wood of Burnley scores his sides first goal during the Premier League match between Tottenham Hotspur and Burnley at Wembley Stadium. Photo: Getty Images
All Whites skipper Chris Wood will arrive in New Zealand on a goal-scoring high after his 92nd-minute strike earned new club Burnley a 1-1 draw with Tottenham Hotspur at Wembley.
The 25-year-old striker left soon afterwards to fly back to New Zealand and lead the All Whites in their World Cup double-header against the Solomon Islands later this week.

A £15 million ($NZ26 million) signing from Leeds last week, Wood made a dream return to English Premier League football to rescue a point for Burnley in dramatic fashion.

Spurs, beaten 2-1 by Chelsea last week, had taken the lead early in the second half when Dele Alli scrambled home from a 49th minute corner.

But Wood stood up when it mattered, latching on to Robbie Brady’s superb pass to slot the ball past Spurs keeper Hugo Lloris.

"Everybody looks at you as a striker when you come into a club to get off the mark and get up and running and it’s nice to have done that," Wood told Burnley’s club website.

"Thankfully it hasn’t taken a long time, but it’s extra special because we got a good point away from home.

"I think that sums up the team," he said.

"We’ll work right up to the 95th-minute. We won’t give up. That’s four points from two away games — that’s huge and something to build on, and we’ll look to go again after the international break."

"I thought the belief and the endeavour of the side to get a point was outstanding.

"I’m pleased for Chris Wood, and it was an outstanding pass from Robbie Brady; sublime, and a fantastic finish — a keeper like Lloris could only watch it go in."

Wood, who scored 30 goals in all competitions for Leeds last season, has previously played nine times in the premier league, twice as a teenager in 2009-10 for West Bromwich Albion and seven times in 2014 for Leicester City.