Women’s officer steps down to study 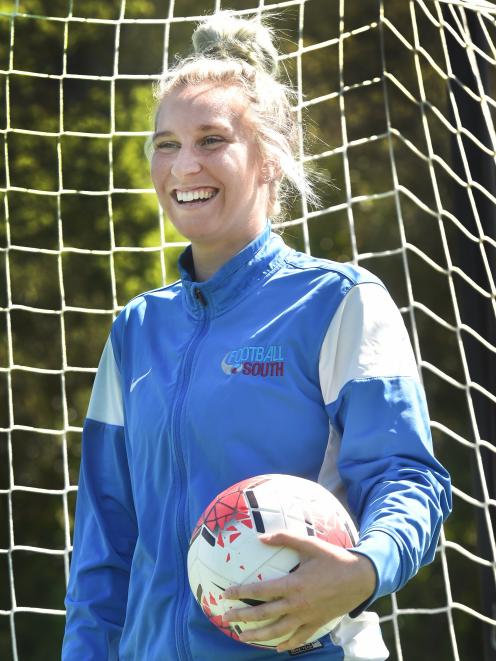 As she returns to football in one capacity, she is leaving it in another.

The goalkeeper made her return to Southern United last Saturday, playing her first national game in two years after a serious knee injury.

Just days later, she announced she was finishing in her role as Football South’s women’s development officer.

She has been in the role for three and a-half years and decided it was time to move on.

Next year she will study applied science at Otago Polytechnic; she wanted to obtain a qualification, having not studied after leaving school.

She was sad to leave, but would remain involved as much as she could as both a volunteer and with Southern United — which plays the Northern Lights tomorrow at Logan Park Turf.

"I’ve got a lot of fond memories at Football South," she said.

"I’ve been really lucky to have formed such awesome relationships with not only people at Football South, but also people within the community.

"There’s a lot of people that have done some pretty incredible things for me and supported me, you don’t forget those people."

She was pleased with the way women’s football had grown during her time in the role, both in interest from the community and opportunities for players.

Part of that had come in the Southern team, and she had been thrilled to see it establish itself in recent years.

She was a key player in the 2017 team that made the playoffs, having just returned to Dunedin after time in Auckland with the Football Ferns.

The team has not reached those heights again, but it has remained a far more competitive outfit than it had been before that.

Nicol has been on the sidelines for those past two seasons, but finally returned a week ago against Capital in Wellington.

She admitted there was plenty of rust evident, but she was enjoying the challenge of getting back to the standard she used to be.

"Stepping out on to the pitch I had tears in my eyes.

"It was quite unreal to be back and to think that after two years of not being able to play at that level, that I’m able to be able to get back and do it.

"It’s quite a surreal feeling getting back into doing what you love."

She gives the side one of several quality keepers.

Former New Zealand under-17 goalkeeper Blair Currie has joined Southern this year, as well as Roslyn Wakari’s Hayley Julian, a group Nicol was enjoying being in.

She was expecting a tough game from Northern, a perennial power of the league which is packed with stars.

The game kicks off at noon.