Internationals on cards for Central Otago 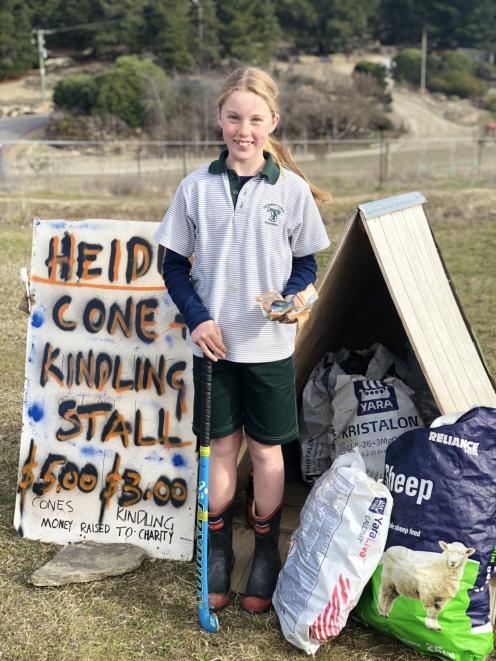 Terrace Primary School pupil Heidi Winter (10) shows off the fundraising stall that has contributed the first donation to the potential $2 million needed for the planned full-sized hockey turf in Alexandra. Photo: Supplied
International hockey games could be on their way to Central Otago following the announcement of a full-sized turf for Alexandra.

The Vincent Community Board recently announced the provision of a 7500sqm area within Molyneux Park for the turf, and fundraising for the project had begun, Molyneux Turf Incorporated president Bridgette Winter said.

The type of turf and its exact location had not been confirmed, but it was likely to cost from $1.5million to $2million to build.

It could result in international games and national tournaments for Central Otago, as the district would then have two turfs 20 minutes apart - in Alexandra and the existing water turf in Cromwell.

It was hoped the Alexandra turf, which would be used by other sports, would be built by 2021.

The Molyneux Turf group had worked with funders since 2013to see a full-sized hockey turf built in Alexandra, she said.

The Cromwell turf had become oversubscribed as hockey player numbers continued to grow in Central Otago.

Molyneux Park had been identified as an excellent sports hub and a suitable location for a turf by independent reviews, Winter said.

Fundraising for the project had now begun ''in earnest''.

The Molyneux Turf committee planned to raise as much money as possible before applying for grants for the project.

Sponsorship would also be sought, and the project had just received its first donation - $80 from Terrace Primary School pupil and Central Otago representative hockey player Heidi Winter, who had to raise at least $80 to give to a charity for a school homework assignment and gave the money from a fundraising stall she held to the turf project.