The Queenstown team trailed the Dunedin Thunder 1-0 heading into the final period, before rallying to emerge 3-1 winner in Queenstown on Friday night.

It followed up with a more convincing 6-2 win, also over the Thunder, on Saturday.

The wins extended the Stampede’s unbeaten streak to 38 games, stretching back to June 14, 2019, when it was beaten by the Botany Swarm.

Dylan Devlin got the Thunder off to the best possible start on Friday night.

He gave the team a lead after just four minutes, finishing past Aston Brookes after receiving a pass after a run down the right by Mat Enright.

It was to be the only goal in the first two periods, Thunder goal tender Scott Moore making 25 of his 39 saves in that time, to deny the hosts.

However, at the other end Brookes remained perfect — with 25 saves of his own — while the Stampede peppered Moore’s goal to find a way through.

Callum Burns made use of a two-man advantage early in the third period, shooting past Moore from the right.

Josh Hurley gave the Stampede the lead with 12 minutes to play.

It became 3-1 with less than two minutes to go, as Connor Harrison broke away and scored a superb individual goal.

Moore made 46 saves, although the Stampede’s 51 shots were always going to be too much to keep out — especially in comparison to the Thunder’s 21.

Macharg got the Stampede going with two goals in the first period, before Devlin made use of a Thunder two-man advantage to score in the second period.

It was short-lived respite, though, as Mike McRae restored the two-goal lead and shortly after, Harrison made it 4-1.

Ian Audas scored his first goal of the season early in the third period, but Macharg put the game out of reach with two more goals.

■  The Tampa Bay Lightning spoiled Colorado’s party to stay in the hunt for a third straight Stanley Cup title, beating the Avalanche 3-2 in game five on Saturday, AP reports.

The cup was all shined up and in the building, too.

It has heading back to Tampa for game six today.

The Lightning trails the best-of-seven series 3-2.

Valeri Nichushkin and Cale Makar had goals for Colorado. Makar’s third-period tally bounced off the skate of Erik Cernak and through the pads of Vasilevskiy to tie it at 2. 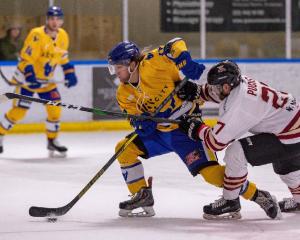 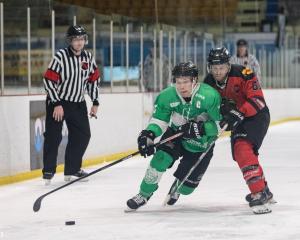