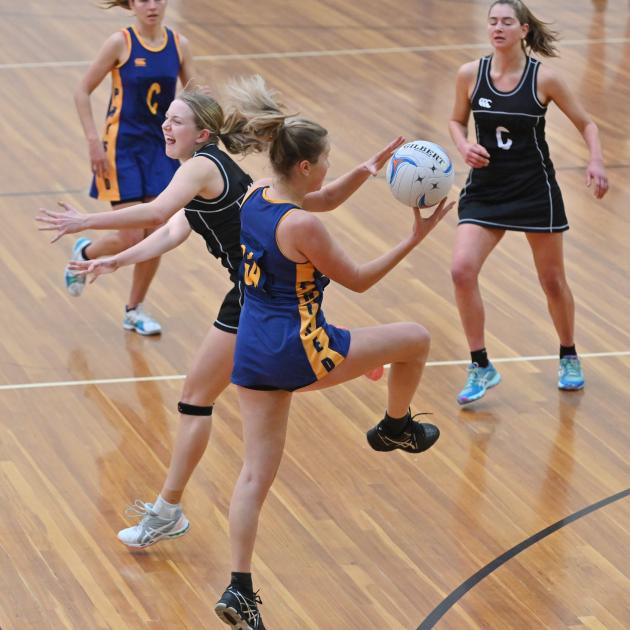 Physed Blue goal attack Maggie Burns takes a pass despite the best efforts of Southern Magpies goal keep Lauren Pickett as Rosa Edwards (left) and Jess Allan watch on during their game at the Edgar Centre on Saturday. PHOTO: GERARD O'BRIEN
Physed B has taken bragging rights over St Hilda's Collegiate Senior A.

It won a close one 46-43 to begin the Dunedin senior club competition's second round.

Physed B took control of the match in the first quarter with a couple of runs of four goals to keep the score ticking over in its favour.

Physed had nice flow through court on attack and, even when that was disrupted, it showed great patience to keep possession.

On the other side of the court, St Hilda's struggled to bring the ball through court under the pressure being put on by Physed.

Physed finished the first quarter with a dominant 18-6 lead.

The second quarter had St Hilda's putting on a mini-run of its own within the opening three minutes of the quarter.

While St Hilda's had been flustered on attack in the first quarter, it was far more controlled in the second.

However, moments of complacency kept Physed in the quarter.

Although the momentum swung towards St Hilda's in the first part of the quarter, Physed kept itself in possession with some solid rebounding at both ends.

It was anchored by the calming influence of Bella Masani at goal shoot.

After the long break, Physed struggled to react to St Hilda's lift in intensity.

Goal defence Annie Timu picked up a couple of lovely intercepts to give St Hilda's another mini-run to get itself back within 10 points.

Annie was not the only Timu on court though.

Although St Hilda's had two more mini-runs of goals in the third period, Physed showed patience on attack.

The final quarter was similar to the third, St Hilda's making Physed work for it.

The full-court pressure on defence from St Hilda's meant Physed had to continue to be patient getting the ball into the circle.

Once it got there it came down to Masani's shooting to keep the goals ticking over for Physed.

Masani finished the game with the best shooting stats on court at 86%.

St Hilda's continued its comeback to win the final quarter 13 goals to eight, but the dominant first quarter from Physed was enough for it to stay ahead at the final whistle.