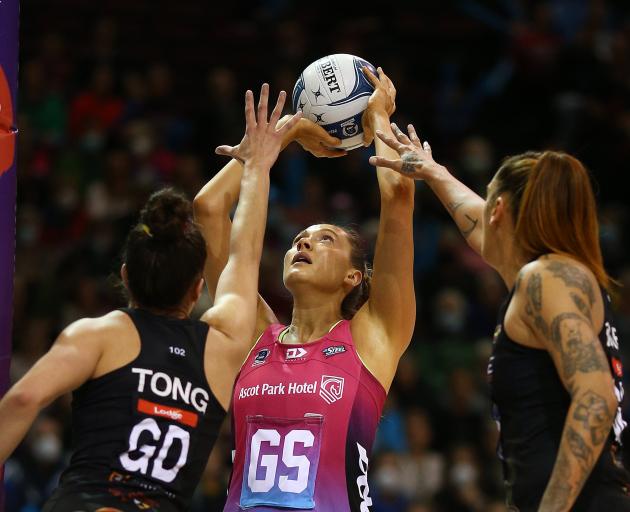 That is the very simple, if relatively challenging, task for the Southern Steel if it is to make the ANZ Premiership playoffs.

The Steel will face three games in seven days, starting this Sunday, and almost certainly must win the lot to sneak into the preliminary final.

A mixed Invercargill doubleheader — a solid 68-57 win over the Magic yesterday followed a 59-49 loss to the Pulse on Saturday — leaves the Steel on 19 points, six behind the Northern Stars and Central Pulse.

All three teams have three games to play, and there are two Stars-Steel clashes.

The No 1-ranked Northern Mystics are suddenly looking vulnerable but, on 31 points, are guaranteed to progress.

There are various permutations, and other teams could do the Steel a favour, but by far the likeliest path to the playoffs for the Steel is winning out.

And if you need perfection, or at least very close to it, give George Fisher a call.

The peerless Steel shooter was at it again yesterday, landing 50 of her 51 attempts in a virtuoso display under the net.

Fisher was perfect through three quarters as the Steel, still fielding a depleted line-up, jumped to a seven-goal lead at the first break and never really looked like relinquishing control.

Beside her, Georgia Heffernan — deputising for the ill Saviour Tui — rebounded from an erratic performance on Saturday to drop in 18 goals from 20 attempts.

Sister Kate was dynamic in midcourt, swooping on four intercepts.

Behind her, the Steel defensive end looked polished all round as Te Huinga Reo Selby-Rickit and Kate Burley combined beautifully to snaffle anything loose.

Play like that again this Sunday, in the first of back-to-back clashes with the Stars, and a gutsy playoff spot will be on the cards.

The situation was not quite so impressive on Saturday, when the Steel struggled to get on top of a settled Pulse team marking Erikana Pedersen’s 100th game.

The Pulse skipped out to a lively 8-2 start as shooters Aliyah Dunn (44/45) and Tiana Metuarau (14/16) set the platform for a strong performance.

Shannon Saunders tried everything she could for the Steel at wing attack, but Pulse defenders Kristiana Manu’a and Kelly Jury were able to lock down the circle.

The other games in the round indicated this competition is still wide open.

The Stars are surging, having won five of their past six games.

On Saturday, the Mystics fell 54-49 to the Tactix, who play the Pulse tonight to complete the round.