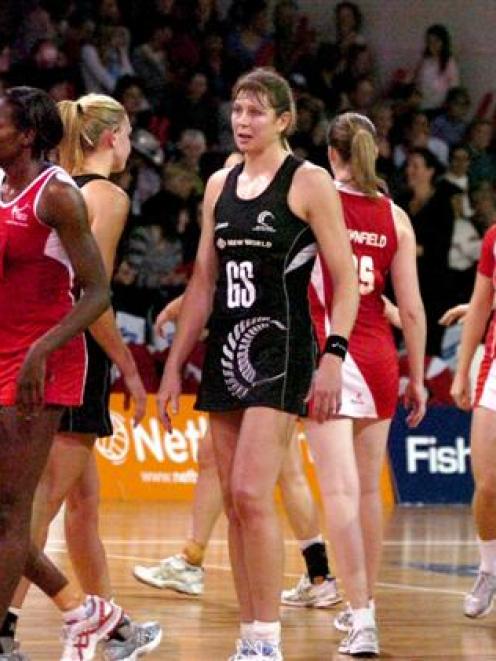 A dejected Irene van Dyk (centre) makes her way to the sideline after the Silver Ferns were upset 40-38 in the second test in Dunedin last night. Photo by Jane Dawber.
Was it complacency? Were they flat? Was it rotation? Just how did the Silver Ferns turn a 39-goal rout of England into a 38-40 defeat?

It was hard to believe one was watching the same side which destroyed England 65-26 on Monday night.

The Ferns went from awesome to awful in 48 hours, leaving a stunned Dunedin crowd filing out the doors with long faces.

For England's part, the tourists certainly made improvements.

But they were kept in the game during a bumbling first half from the home side.

Despite the Ferns' best efforts to squander possession, they held a four-goal lead going into the half-time break.

But England emerged from the dressing rooms the stronger side and stunned the Ferns.

In the 68 previous matches between the nations, England had won just twice and managed two draws.

For three quarters the 2600-strong crowd must have expected their side was going to turn its performance around with the next centre pass, but the mistakes kept coming.

They finally knew it was not going to be the Silver Ferns night when the incomparable Irene van Dyk missed consecutive goals from right under the hoop in the final stages of the match.

It is an old adage that you never change a winning side, but Silver Ferns coach Ruth Aitken opted to make three changes from the starting side which had outplayed England so comprehensively on Monday night.

Dunedin-based defender Katrina Grant got her second start for the national side.

England welcomed back classy defender Geve Mentor who combined with player of the match Sonia Mkoloma to make life tougher for the Silver Ferns attack end.

Whether it was the changes or just the Silver Ferns playing down at England's level is a moot point.

The end result was an awful 15min of netball with both sides spraying passes and fumbling ball in a mediocre display.

It was almost a relief when the umpire closed the opening stanza with the side locked at nine goals apiece.

Aitken resisted the urge to return to her first-choice side, providing Bowden and Wipiiti a chance to redeem themselves after a disappointing start.

England showed signs of improvement from its heavy defeat and pressured the Silver Ferns in the midcourt.

The home side strung together a five-goal run midway through the period and took a four-goal lead into half-time.

That advantage quickly disappeared, thanks to a series of turnovers, and England took the lead back with a five-goal run of its own. With the tourists' belief growing with every centre pass, it was soon apparent the Ferns were not suddenly going to find another gear and stroll away with the match.

Mentor and Mkoloma disrupted the flow of ball and forced the Silver Ferns to shoot from further out. Their defence was superb but the Silver Ferns contributed to their demise with some sloppy work from the feeders.

A muted crowd anxiously urged on the Silver Ferns, trailing by one goal with 15min remaining. But by this stage England was desperately hunting every half chance to snaffle possession and completed a most remarkable turnaround.

The third and final test will be played in Palmerston North on Saturday.