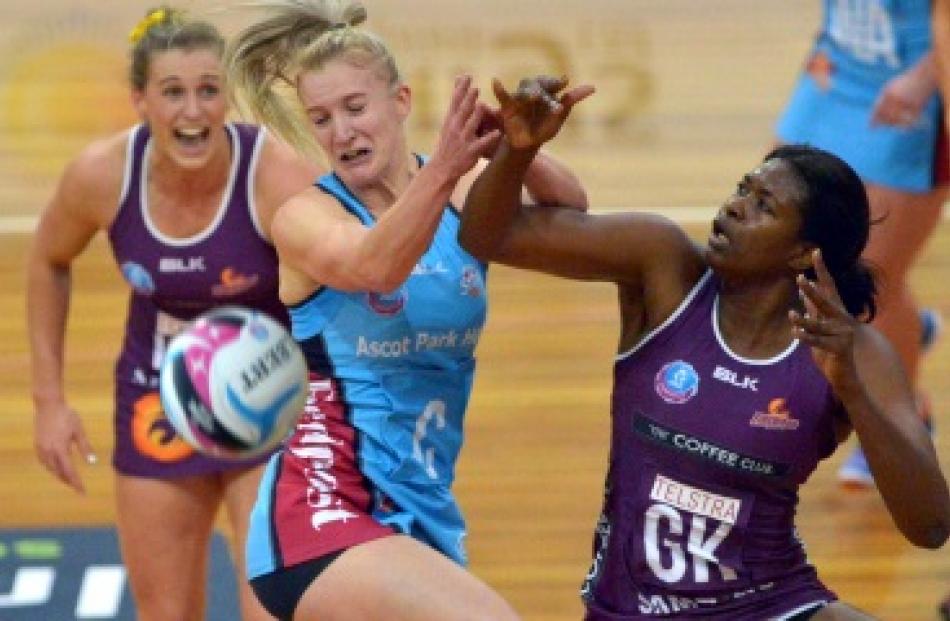 Southern Steel centre Shannon Francois (left) and Queensland Firebirds goal keep Romelda Aitken tussle for the ball during their match at the Edgar Centre on Saturday. Photos by Gerard O'Brien. 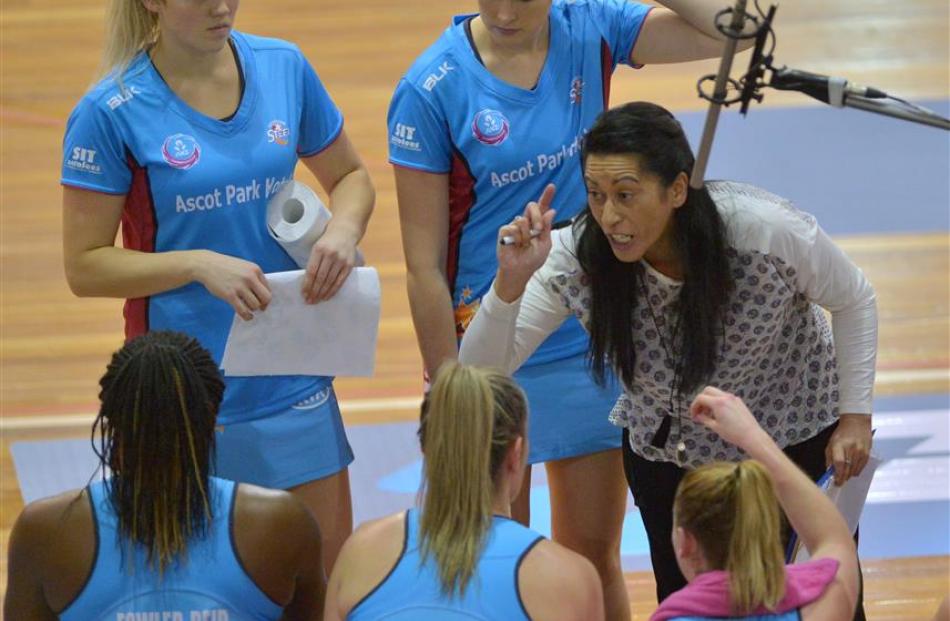 Southern Steel coach Noeline Taurua talks to her side during a break in play.

If this was meant to be the Southern Steel's toughest test of the season, then it may need to go up a class.

The southern side confirmed its status as a genuine ANZ Championship contender on Saturday by recording just its second win over the defending champion Firebirds, thumping the Queensland side 66-51 at the Edgar Centre in Dunedin.

The win puts the side on top in the overall competition.

The Firebirds may have been struggling in the chilly Dunedin conditions and without key players Laura Geitz and Clare McMeniman, but the emphatic nature of the home side's victory in front of a capacity crowd of 2700 confirmed this Steel side can foot it with the best.

It was just the Steel's second victory against the Firebirds, its only other win having come way back in 2008, when it edged the Australian side 54-52 in Invercargill.

This was also the Steel's ninth win of the season, eclipsing its previous record of eight wins, which it has achieved twice previously.

As has become customary this season, the Steel sealed the deal in the final quarter, outscoring the visiting side 19-14.

However, this time it was just a matter of hanging on, as the Steel took a 31-19 lead into the halftime break and a 47-37 advantage into the final quarter.

This was expected to be a tough tussle between the competition's two leading teams but, although there were some bruising one-on-one battles, the Steel was in control for much of the encounter.

The Firebirds sprang an early surprise when they moved star shooter Romelda Aiken to goal keep, to fill the void left by defenders Geitz and McMeniman, and set up an intriguing battle with fellow Jamaican international Jhaniele Fowler-Reid in the shooting circle.

Geitz was ruled out for medical reasons and McMeniman was scratched due to injury.

However, while Aiken managed to get in front of Fowler-Reid on a couple of occasions, the hometown hero stood firm as she shot 21 from 26 in the first half.

More importantly for the Steel, goal attack Te Paea Selby-Rickit stepped up when her team needed her most, putting up 12 shots in the first half and nailing 10 of them.

Selby-Rickit, who finished with 15 goals from 17 attempts, got into the game straight away, slotting two early shots, and never looked back.

The dynamic attacking player, who landed several long-range shots, including one almost from the circle edge, also contributed 26 feeds and 15 goal assists before she was subbed for Brooke Leaver late in the fourth quarter.

Her sister, Te Huinga Selby-Rickit, also made her presence felt in the goal defence position.

The veteran defender got her chance last week when she stepped in for an ill Storm Purvis and continued where she left off when she got another crack on Saturday.

She pulled off five rebounds, three intercepts and four deflections, many of which were in the first quarter, as the Steel pulled away to an early 14-8 lead.

The Steel extended its six-point advantage to 12 in the second quarter, showing impeccable patience on attack in the face of some heavy Firebirds defence.

Aiken was moved to her usual goal shoot position for the second half but the damage had already been done.

The gap was pulled back to eight at one stage in the third quarter, but was restored to 10 by the end of the period.

Playing catch-up netball, the Firebirds fired several long balls well wide of its shooters in the attacking circle and the game began to open up.