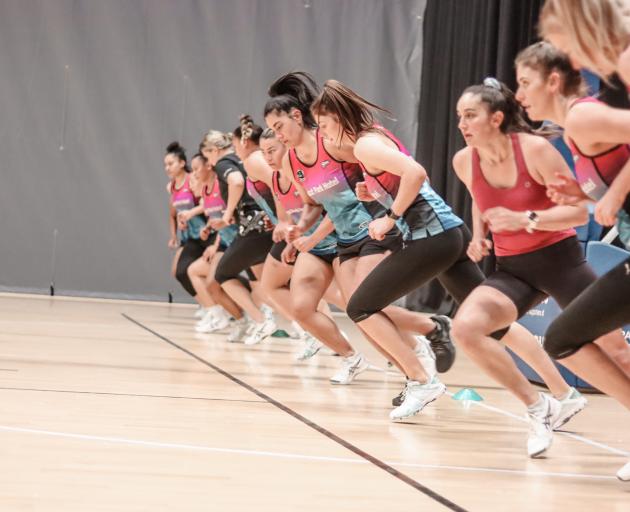 Southern Steel players work on their fitness as they begin pre-season training at Stadium Southland in Invercargill. PHOTO: LAURA OVERTON
There was a more familiar feel as the Southern Steel reassembled this year.

After a squad overhaul last season, the team has a more settled look to it heading into the 2022 ANZ Premiership.

It has gathered in Invercargill this week — minus English shooter George Fisher — to begin preparations.

Testing, court work and getting to know each other have been on the agenda so far.

Plenty of hard fitness work is set to follow.

Coach Reinga Bloxham said it had been good to have everyone together.

The three additions — Kate Burley, Saviour Tui and injury returner Georgia Heffernan — had all slotted in well and were bringing a freshness to the group, she said.

That was key in ensuring the team did not fall into thinking it would simply carry on from the season’s end.

"We have got a lot of the core group of players," she said.

"But having those three new girls coming in has given it enough to make it feel new again.

"I think that’s a good thing, because then complacency doesn’t come into it.

"But it’s also nice to see the girls we had for the first time last season. They look more ready and more prepared coming in this season, which is great because we want them to take that step up.

"They’re familiar with how we do things, so it’s not as big a learning curve for them.

"They can lead the others to get to know how we do things," Bloxham said.

That propelled it into the playoffs.

Having kept much of that group together, the underdog tag will be well and truly shed.

However, Bloxham felt there was enough change in key areas to ensure this team would have a different look and feel to the last one.

"I’m sort of looking at the people we’ve brought in. We’ve got two new shooters with Georgia and Saviour.

"That changes the whole dynamic of the attacking end. We just have to make sure we get that foundation right.

"That they’re really solid in what they’re doing in their structures and we work out what their strengths are.

"I still feel like we’re a bit of a new look. We’ve got a long way to go before that first
game.

The team will remain together for the next few weeks, before going home for a break over Christmas.

Fisher is expected to join the group following January’s Quad Series in England, at which she will likely play for the host team.