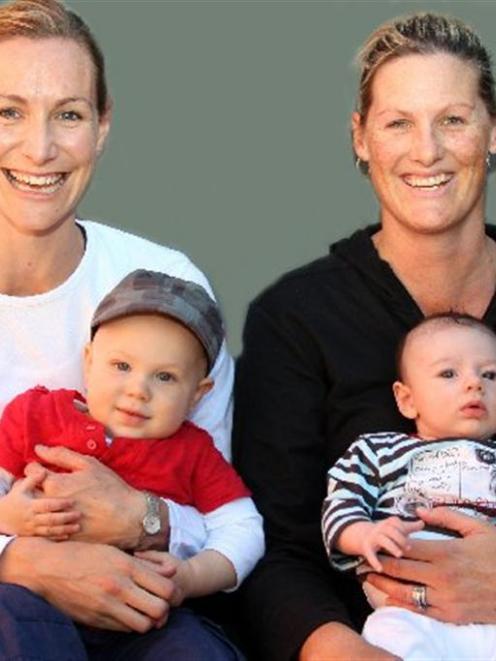 But this season the new mothers will each have an additional little supporter on the sideline.

Life has changed dramatically since the former internationals carried the Sting to victory in 2007 in the now-defunct National Bank Cup.

The pair formed arguably the best attacking combination in the game, but both switched netball bibs for baby bibs after starting their families last year.

Wilson and her husband, dual rugby and cricket international Jeff Wilson, got in first with their son Harper - a happy 10-month-old.

He was busy trying to fossick through the contents of a rubbish bin when the Otago Daily Times phoned.

"You just can't walk out the door and go to netball practice any more," Wilson said, after gently diverting her son's attention from the rubbish.

"You have to make sure Harper is fed and taken care of . . . He's either with his dad or we've got a nanny who is looking after him, or with family. So, we're really lucky because we've got lots of support."

Cooper (11 weeks) is still breast feeding and will accompany Wilkins to all the Steel's games.

Getting to practice is an undertaking these days, Wilkins said, describing Tuesday as "the day from hell".

"But I've got a great support crew that are helping look after Cooper," she said.

"And my mum is coming to all of the games."

Wilkins was not meant to do any running until 12 weeks after the Caesarean but put on her sneakers and started pounding the pavement after six weeks.

She had her first "full training" with the team last week.

Wilson laughed when asked if she was as fit as ever: "I wish," she said.

The pair will return to top level netball when the Steel play the New South Wales Swifts at a pre-season tournament in Queenstown starting tomorrow.