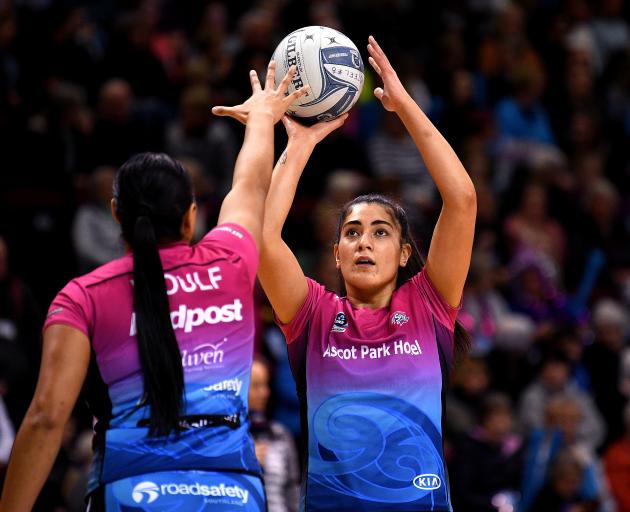 Steel shooter Kiana Pelasio warms up ahead of the ANZ Premiership game against the Mystics at Stadium Southland in July. Photo: Getty Images
A talented trio of training partners has been recruited by the Southern Steel for the 2022 season. 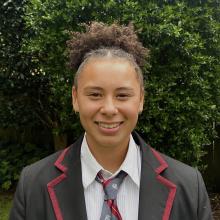 Steel coach Reinga Bloxham is eager to witness their development in the elite environment.

“We want to give these players a chance to really excel and take their netball to a new level,” she said.

Bloxham was happy to retain Pelasio, who was a contracted player in 2021.

“I’m really pleased she has taken the opportunity to be a training partner.

"She has made huge gains in the last two seasons and wants to keep building and learning.

"She is an awesome team-mate and contributes positively on and off the court. She has versatility in her game and knows what we expect.”

Fifita follows in the footsteps of older sister Taneisha, the talented defender who is taking time away from professional sport to pursue a church mission.

"She has certainly stood out this season regardless of whether it’s playing school, club or representative netball. She has the ability to get gains and needs to be extended in an environment where she can still learn and grow."

Christie is a member of the New Zealand secondary schools squad. Her promise as a netballer was rewarded with a three-year scholarship from the Tania Dalton Foundation last year.

“Ivari came about by another netball friend in Hamilton who brought her to my attention," Bloxham said.

"I want to keep building our midcourt stocks and she had been mentioned as having a promising netball future.

"She has a very good work ethic, is self-motivated, organised and prepared to work hard. All the qualities I look for in players.

“She is prepared to move here to help her achieve the next stage in her netball and knows nothing is guaranteed.”

For Christie, the opportunity came out of the blue.

“When I was at school, my coach Kim (Howard) asked, if I was to get an ANZ contract somewhere, would I go?" Christie said.

"And I said yes, of course, not thinking anything of it. Then in lockdown she texted me and I was completely blindsided. It was crazy.

“I’m super excited. And I’m liking the idea of a fresh start and a new environment to challenge me. As a training partner, you never know when the opportunities are going to come your way and you have to be prepared to step up. I’m going to go with the flow and see where it takes me."

Although she predominantly featured at goal attack for Hamilton Girls’ High School this season, Christie aims to specialise in the midcourt roles.

“I’ve always wanted to get to the Silver Ferns and play in the ANZ Premiership, so that is still the ultimate goal,” she said.

“I was born in England and everyone usually compares my hair with Serena’s.”

The Steel squad starts its pre-season campaign later this month.