Erika Fairweather delivered a remarkable first Olympic campaign in Tokyo this week. Jeff Cheshire caught up with the Dunedin swimmer.

Erika Fairweather went to Tokyo to race against world swimming’s "big dogs". Having completed her first Olympic campaign, she now knows she is one of them.

The 17-year-old returns from Tokyo tomorrow, after a remarkable first Games campaign. 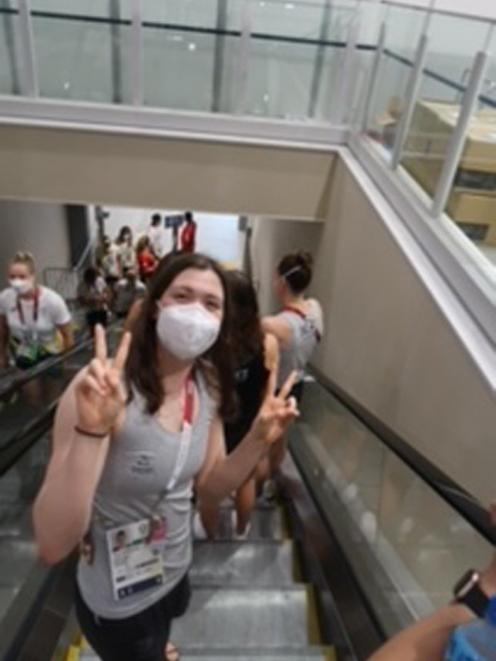 Erika Fairweather takes a ride down an escalator during some downtime at the Olympic village in Tokyo. PHOTO: SUPPLIED

She can now call herself an Olympic finalist and a New Zealand record holder.

Most significantly, she is now ranked fourth in the world in the 400m freestyle this year.

She has shared a call room and a start line with the biggest names in the sport, including Katie Ledecky and Ariarne Titmus.

It must be hard to comprehend for someone who will return to complete the school year at Kavanagh College, after her 14 days in MIQ.

But it was a mindset she was beginning to adopt.

"I think you’ve just got to remember that they’re the big dogs, but you’re a big dog, too," Fairweather told the Otago Daily Times from Tokyo.

"You made it there, you had a lane, you gave it your best, you took your shot and you got it."

Erika Fairweather reacts after coming second in the 400m heat. Photo: Getty Images
Her time of 4min 02.28sec in the 400m heat took nearly 4sec off her previous personal best.

It also leaves her among the world’s elite - regardless of age - and was undoubtedly the highlight of an incredible campaign.

"It was unreal," Fairweather, who swims for Neptune, said.

"I went into that race and I was so excited to race at the Olympics. I’ve never been in such a good place before a race before.

"Then everything just fell into place really well. The warm-up was good. I was just in a really good space. It was awesome.

"...I could see [eventual gold medallist Titmus] a couple of lanes across. So I knew it wasn’t going to be terrible. But it was way faster than I thought I was going to go."

She said she felt "pure shock" and did a double take when she saw her time.

It left her to swim against the biggest names in the world a day later.

"It was pretty intimidating, I guess," she said of waiting in the call room before the final.

"It was something I wasn’t expecting to do at this Olympics. But given the opportunity I kind of took it on and went with it.

"There’s definitely lots to learn from it. It’s kind of hard getting into a call room with the best athletes in the world - you’re up there with them."

She had been disappointed with the race. Her time had been 6sec slower than that of the night before.

Among that, though, she did not lose sight of what she had achieved.

"I didn’t put down the performance I wanted in that final. It wasn’t a race I look back on and think that was awesome, because it wasn’t.

"But I was still pretty happy after the race. I’d just swam in an Olympic final. How many people get to do that?"

She had been happy with her 1min 57.26sec time in the 200m freestyle as well, although she said it was difficult backing up the same day of the 400m final.

She said it was "pretty cool" to see Japan tennis star Naomi Osaka, while the boys on the team had "definitely been fan-girling over the basketball players".

Her next challenge would be a different one - she hopes to learn to do a Rubik’s Cube during her two weeks in isolation.