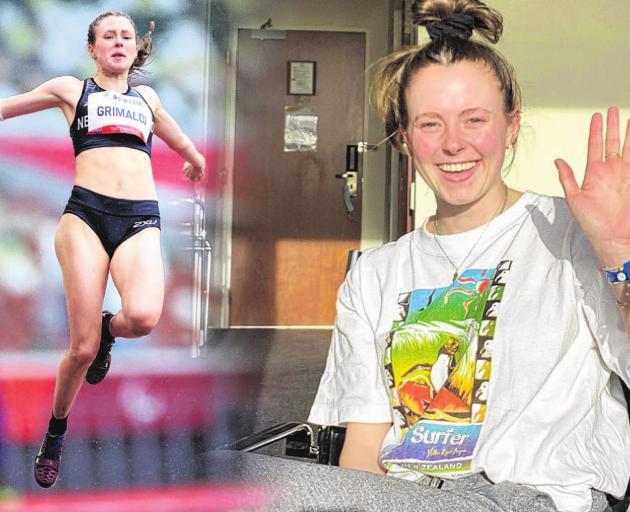 Anna Grimaldi, pictured leaping to gold in the women's long jump T47 at the Tokyo 2020 Paralympic Games earlier this month, waves from her managed isolation and quarantine room in Auckland yesterday. PHOTOS:GETTY IMAGES/SUPPLIED
Anna Grimaldi has been forced into "hiding" — in MIQ — for two weeks.

It is ironic that seven days ago, the lack of a hiding place had made her more nervous than ever before.

The Dunedin long jumper spent last Friday morning in an anxious state at a cold and wet Tokyo track as her Paralympics gold medal defence began.

For the first time in her career, there was "nothing to hide behind".

She was no longer the newcomer she had been when she won gold at the Rio Games in 2016 with a final leap of 5.62m.

A foot injury, which hampered her at the 2017 and 2019 world championships, was also no longer an excuse.

It was a foreign feeling for Grimaldi.

Indeed, she admitted at one point during her competition she looked for a place to throw up in an unnoticed manner.

Her first jump of 5.74m helped ease that somewhat.

That improved to 5.76m, but it was not until her final attempt — when she had secured her second gold medal in the T47 long jump — that she finally relaxed as the nerves turned to joy.

"I think I was getting nervous because my nerves were worrying me," Grimaldi (24) said from isolation in Auckland yesterday.

"I was scared of what I was feeling because I’d never felt like this. I’d always come into a competition and been new and didn’t know what I was doing, or I’d been injured or was recovering form and injury.

"This is the first competition I felt ready for.

"I had an amazing season. I was pretty confident at the end of the season how I was going to go in Tokyo.

"Then to get there and not have anything to hide behind was kind of scary ... there was nowhere to go that made me feel more comfortable. I was out there and exposed.

"I had to give it my best with there being nothing if it didn’t go right, being this is why or this is why."

It is something of a counter-narrative to what those watching saw.

Grimaldi set the tone with a Paralympic record of 5.74m on the first attempt of the competition.

It was a distance only she surpassed and her three legal attempts were all among the four best jumps of the competition.

She knew she could fall off that top spot at any point, though.

Since securing the medal, there has been plenty of pride.

Defending the title was one milestone, but doing it after an 18-month rehabilitation of her foot between Paralympics made it more special.

Having put all that work in gave it more weight than the Rio medal.

However, she said both were significant and her first gold had set her on the path to win this one.

While she cannot wait to return to Dunedin, she is enjoying being able to slow down and relax.

She hopes to defend her title in three years in Paris and potentially run the 100m as well, if the schedule works out better than in Tokyo.

In the meantime, Grimaldi plans to take a break and ease her way back into training for the summer season.