He and veteran paralympians Adam Hall (34) and Corey Peters (38) have been selected for the team.

It will be Ewen’s first, Adams’ fifth and Peters’ third Paralympics. 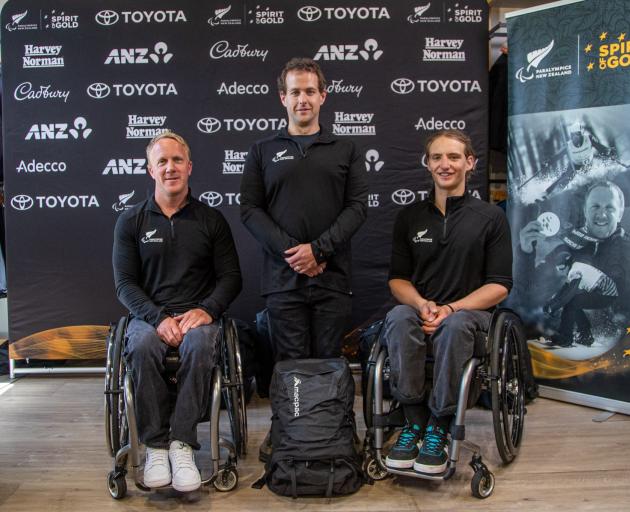 Alpine skiers (from left) Corey Peters, Adam Hall and Aaron Ewen have been selected for the 2022 Beijing Winter Paralympics.PHOTO: SUPPLIED

The selection is redemption for Ewen, who made the team for PyeongChang 2018 but withdrew after fracturing his hip during training.

‘‘I am pumped . . . [after that] I sat on the couch for a very, very long time,’’ Ewen told the Otago Daily Times yesterday.

Ewen gained his first international podiums in 2017 and made a successful comeback during the 2019 New Zealand winter to achieve podium finishes at Southern Hemisphere Cups.

‘‘Thank you to everyone who has been behind him all the time. He has worked really hard for this, so it is a very exciting day,’’ she said.

Ewen gave a special thanks to fitness trainer Matty Graham, ‘‘the most unreal dude out’’.

‘‘Obviously they haven’t had the on-snow time they would normally have during the northern hemisphere but they got a really good break,’’ Graham said.

‘‘These guys have been at it for many, many winters in a row, so there is a bit of residual fatigue that carries on from season to season.

‘‘They are going into this season extremely fresh, strong and robust and once they get over there they will be able to get their on-snow time up and put all the pieces of the jigsaw puzzle together.’’ .

Hall, a two-time Paralympic gold medallist, and Peters, who has a silver and a bronze Paralympics medal, said they were honoured to be selected again.

Hall was looking forward to beginning his campaign in three weeks.

‘‘We are heading straight to Canada and into racing straight away before getting into Colorado, which is where we typically base ourselves,’’ Hall said.

Peters said the support team was ‘‘world class’’ and ‘‘vital to winning’’.

These Paralympics will probably be a little bit different thanks to Covid-19.

‘‘Having not competed now for two years internationally, it is going to be a challenge,’’ Peters said.

Further appointments will be made.