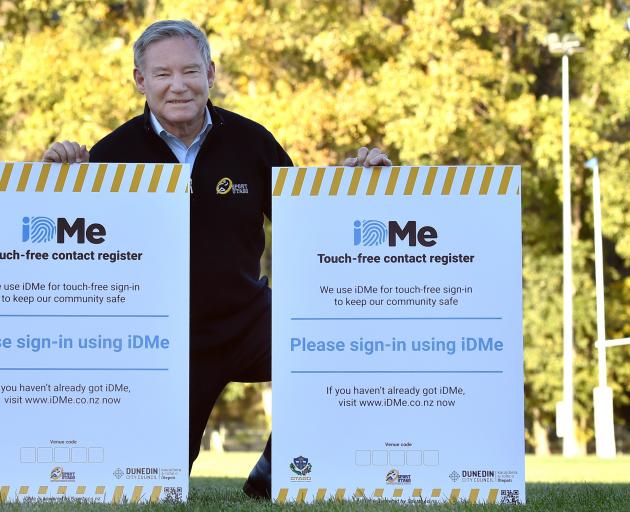 Sign of the times . . . Sport Otago chief executive John Brimble with the contact tracing signs which will be around grounds in Otago as community sport comes back into play. PHOTO: PETER MCINTOSH
Community sport in Otago may undergo real, positive change following Covid-19.

With the moving to Alert Level 1 and restrictions eased, community sport is set to get under way.

Club basketball in Dunedin will start this weekend while some football was played in Wanaka last weekend.

Other sports will have practice matches this weekend and then get back into competitive action over the next couple of weeks.

Sport Otago business development manager Michael Smith has been facilitating meetings between various codes over the lockdown period and beyond and said it was great to see the co-ordination between them.

‘‘It has just been massive the way everyone has stepped up and worked together as one to be ready to go when allowed,’’ he said.

‘‘It has been a positive step forward and that is something we need to look at going into the future — perhaps look at the way sport is played and how it is delivered.’’

A meeting was set for today w at which codes would discuss the future and how to reap the benefits of decisions made.

Smith said it would be a chance to make sure Otago was the best place for community sport in the country.

‘‘We want to be able to create a community where kids are able to play as many sports as possible rather than being locked into just playing the one sport.’’

Smith said seasons was another issue to look at.

Winter codes may look at starting slightly later, in late April, and going into August and September.

Summer codes may then be able to play well into March and April.

The climate in Otago also had an impact as summer sport was difficult in spring because the weather in the region was often wet.

Many codes ended their seasons so representative programmes could be carried out, but Smith said some national sporting bodies were looking at regional organisations to carry out those obligations.

Each regional organisation may work out what was best for them.

‘‘It would be bottom up, feeling what is right for them and the whole sporting community, rather than being dictated to, top down as such.’’

Over the next few days, signs advising spectators to contact trace would be put around grounds throughout Otago. Though it was no longer mandatory to contact trace for individuals and was not the responsibility of the clubs, Smith said it would be up to individuals to use the iDMe app when at games and practices. He has more than 400 signs made and encouraged everyone to carry out contact tracing which was easy and took minimal effort.