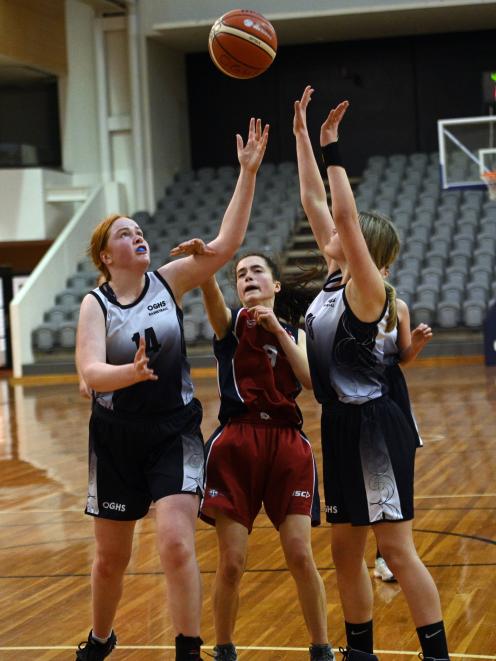 Kavanagh College Junior A player Abby Simpson (centre) tussles with Otago Girls High School Junior A defenders Katelin Rhodes (left) and Zoe Melville during a girls’ basketball game at an empty Edgar Centre in Dunedin yesterday. PHOTO: LINDA ROBERTSON
There will be no spectators, but many of Otago’s athletes will still get to play this weekend.

Football, basketball, netball and hockey all plan to play as much as possible under Covid-19 Alert Level 2.

Gatherings are restricted to a maximum of 100 people and sanitising processes must be followed.

Adjustments have been made to the Edgar Centre to facilitate both basketball and netball.

Each has different entry and exit points, as well as their own bathroom facilities.

The areas will be sanitised between games and players will have to exit before the next group can come in.

Meanwhile, netball will play its senior and secondary school premier grades, although lower grades have been postponed or cancelled.

Most football will go ahead as planned, including the pinnacle Southern Premier and Women’s Premier Leagues.

However, the Friday night twilight league has been postponed until September 4, while the sixth to eighth grade competitions at the Kensington Oval have been cancelled.

It has also confirmed it will move its annual meeting tomorrow to Zoom as a precaution.

Otago Hockey is also continuing to run its competitions, although its under-13 and under-15 inter association matches between Otago and Central Otago tomorrow have been postponed.