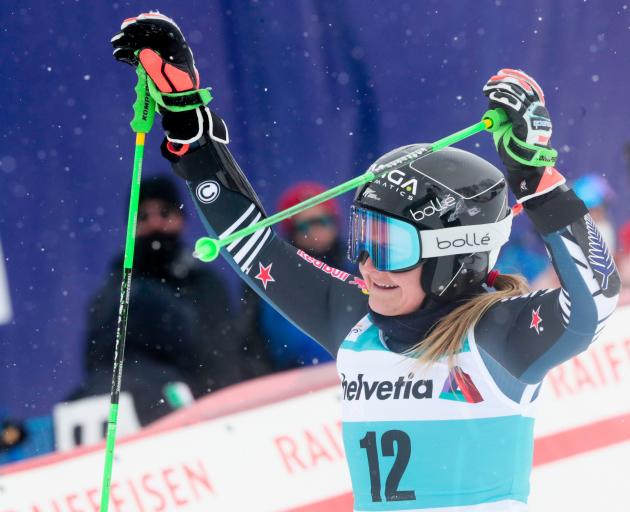 Just over a week since Zoi Sadowski-Synnott and Nico Porteous, both of Wanaka, won gold at the Freeski and World Snowboarding championship, Queenstown skier Alice Robinson climaxed her season by winning gold at the FIS Giant Slalom World Cup finals in Lenzerheide, Switzerland.

Robinson (19) put in a near flawless second run to win the title.

She was trailing in fourth place after the first run but charged through to beat United States champion Mikaela Shiffrin.

It is the third World Cup win of Robinson’s career and she has now become the first woman to win three FIS World Cups before the age of 20 since Mateja Svet, of Yugoslavia, who did it in the late 1980s.

Robinson had finished in second place at the FIS Giant Slalom World Cup in Jasna, Slovakia two weeks ago.

Robinson said she was up for the challenge and went out hard.

"I felt like I was pushing as hard as I could, and I knew that this was my last opportunity of the season so I really wanted to make the most of it, so I am really happy,’’ she said.

A rough, steep course made for hard work for the women, but Robinson put in a world-class performance in her first run.

After run one she was in fourth position, 0.77sec behind Shiffrin.

Robinson executed a near flawless second run — faster by over a second than any other skier.

"It [run two] didn’t feel that amazing but in the past my fastest runs have never been the ones that have felt the best.

‘‘I think when you are actually carrying the most speed you can it feels crazy, and it is hard to control and that’s what it felt like."

The World Cup final is the final event of the season and performances throughout the season earn the skiers the opportunity to compete.

‘‘I still feel like I have a lot more to give and I have a long way to go to be consistently winning on the tour and that is my goal going forwards, to bring this kind of skiing to every race.

‘‘It’s not an easy job but it is something I am working towards.

"This year has been tough, especially with Covid.

‘‘I’ve been in Europe for nine months and haven’t seen any family or been able to go home. It’s been difficult but I feel like I’ve learnt a lot this year and learnt how to get back up after having some failures, so I am pretty proud about today."

Robinson is yet to confirm her return to New Zealand but is keen to catch up with family. They usually travel to Europe but were unable to do so this season.

Robinson is keen to bring her coaching team into New Zealand and get a good training block over the winter which will set her up for the Winter Olympics in Beijing next year.

Porteous also got among the medals yesterday. He claimed the bronze medal at the men’s FIS Freeski Halfpipe World Cup in Aspen.

It was the final halfpipe event of the 2021 season and Porteous has landed on the podium at every event he has competed in this season.