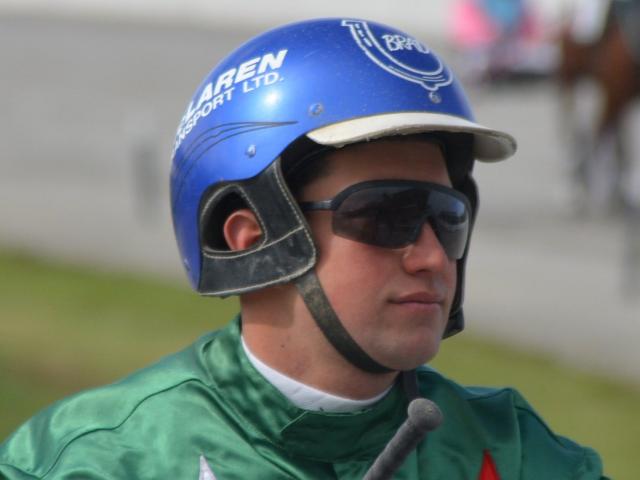 Brad Williamson.
Oamaru trotter Majestic Man made a stunning statement on night two of the Interdominions at Alexandra Park last night when thumping his rivals with ridiculous ease.

Driver Brad Williamson sat motionless in the cart in the home straight as the trotter trained by his father, Oamaru trainer Phil, dashed away from a high-class field to win by 4½ lengths.

The reinsman confirmed the win was as easy as it looked.

“He never left second gear tonight; he just cruised it. He is just in the zone right now — he loves it here and Dad has done a great job with him.”

The way the first 1700m trotting heat panned out meant Williamson’s journey to the races proved more stressful than the race.

The reinsman was forced to rebook a flight from Dunedin and struck it lucky when securing the last available seat.

Phil Williamson had Majestic Man in prime condition for last night’s heat after the horse had failed to back up from a short turnaround in his previous attempt.

The trotter struggled in Habibi Inta’s Dominion after going a slashing race for fourth in the New Zealand Free-For-All three days earlier.

There were no such troubles when Majestic Man won last night, just four days after his sensational run for third on night one.

“It was a wee bit different. That was two miles [3200m] and this was basically one.

“He went a huge race in the free-for-all; he was three-wide down back. If he had had a better draw he could have won that race.”

Although the Paul Nairn-trained trotter was comprehensively beaten, his Interdominion campaign took a major upward turn after his head-scratching performance on night one.

Later last night Ultimate Sniper stamped himself as the horse to beat in the pacing series with a dominant win in heat four.

Receiving a horror run three-wide and in the parked position was not enough to stop the All Stars pacer from delivering a crushing win in the hands of co-trainer Natalie Rasmussen.

Cruz Bromac was third ahead of Mach Shard.

After four heats of the pacing series there have been only two winners after A G’s White Socks backed up his night one win to also remain unbeaten.

Driver Maurice McKendry worked the new addition to the Barry Purdon stable to the front after an early rush resulted in several horses in contesting the lead.

A G’s White Socks worked around to take the front from Chase Auckland at the 1100m and from there his rivals never got a look in.

My Kiwi Mate ran third after following Chase Auckland throughout.

Temporale won the second heat of the trotting series over Marcoola and Paramount Kind to complete last night’s racing.