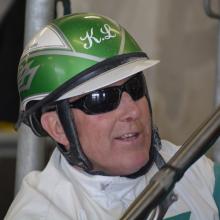 Kirk Larsen
Cheers could be heard across the country after Mr McLaren raced to victory at Ascot Park yesterday.

The 3yr-old reeled off smart closing sectionals to take out race 3 and notch the first win for his owners, the Own The Moment syndicate.

The 80-strong group were banded together as part of a fractional ownership initiative through trainer Kirk Larsen’s stable.

The syndicate has had a few hiccups along their harness racing journey, with two of their horses, including Mr McLaren, running into injury trouble.

Their patience was rewarded yesterday and the style of Mr McLaren’s victory suggests the syndicate will have plenty to celebrate in the coming weeks.

“He has had a few wee issues. He had to have a flap of skin removed that was affecting his breathing,” Larsen said.

“He was a little bit weak in behind, so the time off didn’t hurt him.”

The Own The Moment Syndicate’s members are spread across New Zealand, with some owners able to attend yesterday’s meeting and others forced to watch from home while under Covid-19 Alert Level 4 restrictions in Auckland.

Among them was Wilma Herron, who showed her support for Mr McLaren by donning Larsen’s green and white silks and cheering him on from her living room in Pukekohe.

The pacer came into the meeting ready to start his season in style after winning two workouts.

Larsen is hopeful that now Mr McLaren has stepped up to perform on race day he can keep progressing.

“He has shown speed and both of his workouts this time in were good.”

“He didn’t set the world on fire with the times he ran but he felt really good.”

“I was hoping he would step up on race day and he did.”

“Hopefully he can carry on.”

Mr McLaren could be seen in Canterbury during the New Zealand Cup Carnival but those plans are a long way from being confirmed just yet.

“He’s paid up for the Show Day Futurity. I think he has got to have a couple of starts up there.

“I thought being a syndicate horse we might as well pay up. If you’re not in you can’t win.”

“Whether we go or not I am not sure, we will just see how he goes.”

The Own The Moment Syndicate owns another pacer in Oneloveonelife who is due back in work soon following an injury break.