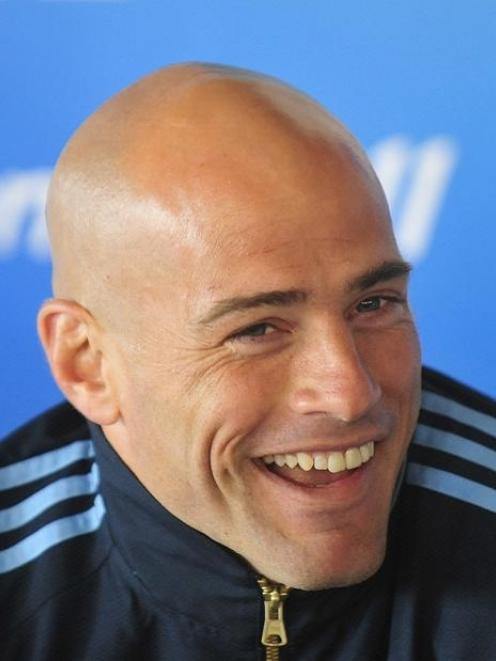 Argentina captain Felipe Contepomi has a chuckle during a press conference in Dunedin yesterday. The Pumas open their World Cup campaign against England at Otago Stadium on September 10. Photo by Craig Baxter.
Argentina did something the All Blacks could not do at the last World Cup - and that is beat France.

In fact, the Pumas managed the feat twice which, by some kind of reckoning, makes the South Americans about twice as good as the All Blacks.

If the form book is any guide, the Pumas appear destined to meet the All Blacks in a quarterfinal next month.

But captain Felipe Contepomi is hoping it will not come to that. He is keen to avoid a clash with the home side, which means the Pumas will have to start the tournament well against England in Dunedin on September 10.

"It will be great to be in a quarterfinal but it is not something that we have thought about," Contepomi said.

"World Cups are unbelievable in terms of anything can happen. You have to take it game by game. Obviously, for me, the All Blacks are the big favourite in the tournament - everyone will try to avoid them if they can.

"But we are focusing on England now and if we can have a good start that will give us some momentum."

Argentina knows all about making a great start. The darling of the 2007 tournament beat the home side France 17-12 in the opening game and made it all the way to the semifinals before losing to eventual champion South Africa.

The Pumas rebounded to thrash France 34-10 in the playoff for third. The All Blacks, of course, bowed out after a shock 20-18 loss to France in the quarterfinal.

Four years on, Contepomi is hopeful his side can recapture some of that magic against England.

"I think that they are better than us and they will be better after the game. But in those 80 minutes anything can happen. We've been in that situation before - at the last World Cup and lots of times and we always say ... we start zero-zero and anything can happen."

Contepomi said his team would have liked to have played more games in the lead-up to the tournament but, otherwise, the preparation had been good.

"We used a 100% our resources and came well-prepared with two months together [and] a good fitness preparation."

Contepomi said he was excited to be in New Zealand to compete at the World Cup and was looking forward to playing at Otago Stadium.

And while the World Cup is the sole focus, next year's Four Nations tournament was also causing plenty of excitement.