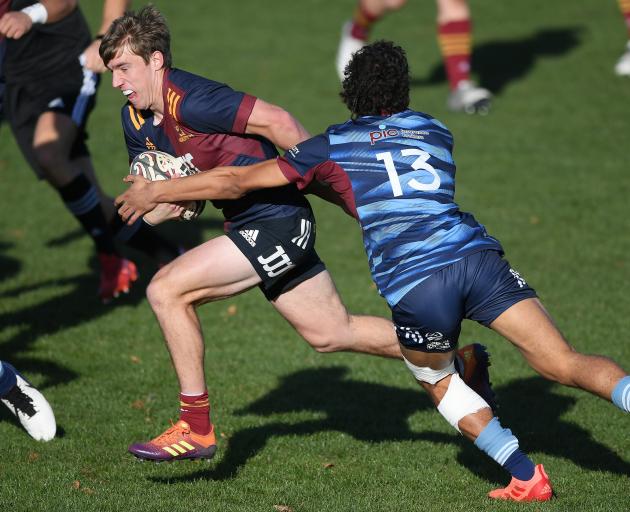 Towering lock Fabian Holland led the effort up front with support from powerful No8 Semisi Tupou-Ta’eiloa, while halfback Noah Hotham was impressive behind the scrum and centre Jake Te Hiwi was a source of several highlights.

The Baby Landers drilled an early penalty through super boot Cameron Millar and edged further ahead when Southland openside flanker Hayden Michaels slipped through off the back of a lineout.

Te Hiwi made some strong carries in the midfield, and Tupou-Ta’eiloa barged his way forward.

The next points came through a horrid lineout. The Blues went long but Hotham collected it and brushed off several tackles in a 15m run to the line.

The Blues replied midway through the half when outside back Liam Brady crossed following a long build-up.

The try sparked the Blues, who added another before the break. Second five Quinton Nichols cut through a hole and offloaded nicely to centre Essendon Tuitupou to finish.

Millar nailed a late penalty to give his side a 20-12 lead at the halftime break.

The Highlanders extended their advantage early in the second spell with a clever lineout move. Hooker Jack Taylor went over in the corner.

Then a quick tap led to the best try of the game. Hotham carried it forward and Te Hiwi’s extraordinary behind-the-back pass put winger Jeremiah Asi in the corner.

Byron Smith provided a tremendous assist as well. His skip pass found winger Cephus Salaivao, who stepped his marker and scored for the Blues.

The Blues scored two further late tries but had fallen too far behind.

In the other games, the Barbarians edged the Crusaders 17-15 to remain unbeaten, and the Chiefs were too strong for the Hurricanes, winning 58-26.

In the final round on Saturday, the Blues play the Crusaders, the Barbarians play the Hurricanes, and the Highlanders face the Chiefs.