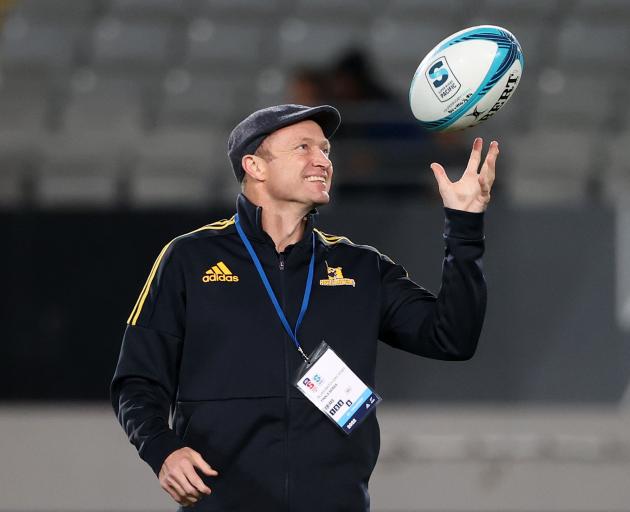 Tony Brown enjoying the atmosphere before his final game in charge of the Highlanders at Eden Park last month. PHOTO: GETTY IMAGES
He left New Zealand so quickly after the Super Rugby Pacific quarterfinal that there was no time for a debrief of the campaign. Tony Brown is back in Dunedin for a short spell, and sits down with sports editor Hayden Meikle to talk about all things Highlanders and Japan.

Tony Brown is buzzing with excitement.

The traditionally reserved former Highlanders coach — the "former" in that description still feels a bit weird — has a grin a mile wide.

But don’t rush to assume that is because he is home for a month to spend precious time with family and friends, or that the Japanese national rugby team he helps coach continues to take great strides on the world stage.

The Yankees are responsible for that smile.

It is not a well-known fact that Brown is a baseball tragic, courtesy of the hours he spent watching the only English-language television channel when he first went to Japan as a player nearly 20 years ago.

The New York Yankees were on constantly, thanks to the presence of Japanese star Hideki Matsui, so they became Brown’s team, and he is in baseball heaven at the moment as the Yankees have the best record in the Major Leagues at 70-34 and star slugger Aaron Judge is on fire.

But we can’t talk about baseball all day.

Highlanders fans want to know what Brown thinks of his successor as coach, and whether he is optimistic the team can do a lot better in 2023 than it did this year.

On the topic of the new boss, Brown is unequivocal: Clarke Dermody is going to do a fine job.

"He’s an exceptional coach, whether it’s the scrum, the lineout, the maul or just with individual players," Brown said yesterday.

"The players believe in his coaching, which is half the battle around getting players to perform the way they need to to win.

"He’s already got that belief from the players. He’s a really smart rugby guy who is measured with how he goes through the week, and really well planned.

"I think he’ll do a great job leading that environment."

Brown will retain a keen interest in the Highlanders but will not have any role to play other than a friendly ear for the new coach.

"I’m always available if he needs a hand with anything. That goes for any rugby in this region.

"But it might be better for Derms just to have a real crack at this himself, start afresh, start with some new ideas and build a team how he wants to build a team."

While Brown has not had much to do with Chris Boyd, he suspects the new Highlanders mentor will be a positive influence for Dermody and the team.

The coaching team is falling into place — now it is up to the Highlanders players to show they are better than their record of four wins and 11 losses suggests.

Brown has some interesting thoughts around how the men on the field need to embrace the opportunities they are given.

"There’s a little bit of something missing in New Zealand rugby at the moment.

"I feel as though we’ve got a lot of good rugby players who have got potential, but a lot of our players are not quite getting there quick enough, so that’s the challenge for New Zealand rugby.

"The Highlanders have had some of these guys for a number of years and I guess it is time to prove, not only that they can be good Super Rugby players, but they can be All Blacks, and have good All Black careers."

The outgoing head coach had about 15 hours in airports to reflect on the Highlanders’ campaign after their towelling at the hands of the Blues in the quarterfinal.

Brown was disappointed with how the season ended and that the Highlanders never really got going.

"For the Highlanders to win Super Rugby competitions, a lot of things have got to go well," he said.

"You need a bit of luck, and you need a really competitive team that is playing well.

"I just felt as though we didn’t get a lot of luck with anything in this campaign. We got injuries at the wrong time, and we struggled for consistent form.

"I loved the way we prepared for a lot of games. But in that 80 minutes on the field, we just didn’t really get the game that we wanted to play, and we were really unlucky around various referees’ calls and injuries.

"If things aren’t going your way, you struggle to find your best form, and that sort of summed up our campaign."

On the bright side, Brown felt the Highlanders had a loose trio as good as any in world rugby, and he was delighted that halfback Folau Fakatava continued his progression into the All Blacks.

He is excited at the next generation coming through, and highlighted the fact the Highlanders would be boosted by the return of stars Jona Nareki and Pari Pari Parkinson from injury.

Mostly, though, Brown’s mind is now on Japan.

He and Jamie Joseph have an intense 12 months ahead as they prepare the Japanese for another tilt at the Rugby World Cup, having done so well on home soil in 2019 by beating Ireland and Scotland to reach the quarterfinals.

Japan played Uruguay then France (twice) in the June window, and will head to France and England at the end of the year. There is also talk of the All Blacks calling into Tokyo.

"We’re definitely getting a lot more opportunities against tier one teams, which is really exciting for Japan," Brown said.

"I think we’ve always been able to compete to a certain level. It’s just being able to turn that into victories which is the hardest thing.

"The way we play the game — the speed and the skills and the fitness of the Japanese — allows us to be competitive at the highest level, but then it’s the physical parts of the game.

"Being able to scrum, maul and defend bigger men is what wins test matches."

There was still a buzz around rugby in Japan following the 2019 tournament, Brown said.

The second test — Japan threatened a boilover before losing to the French by five points — attracted a crowd of nearly 60,000 to the national stadium, a figure that would have seemed in the realms of fantasy years ago.

Brown and Joseph are squarely focused on getting Japan into the playoffs at the 2023 World Cup then seeing what happens.

"We feel if we get our game right, and get players to the right standard, we are able to beat the best teams in the world."