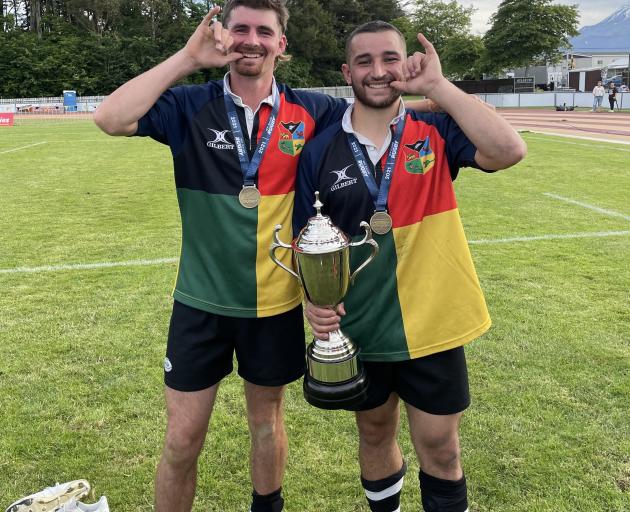 The Carisbrook Bush Pigs beat the Tukapa Bantams 32-23 in the New Zealand Barbarians under-85kg final in Inglewood on Saturday.

The competition is in its third year but this is the first year it has been open to teams from the South Island.

It is a grade New Zealand Rugby is keen to promote and, judging by the support the Bush Pigs have picked up throughout their first campaign, the union might be on to a winner.

Bush Pigs coach Thomas Grant said the support "has been next level".

"We’ve been so blessed with the amount of messages we’ve received and we’ve had shout-outs from All Blacks in videos and stuff like that, so it has been really awesome."

The game followed the NPC Championship final between Otago and Taranaki.

The Bush Pigs laid the groundwork for their win with some solid work on defence and they had a definite edge out wide.

Outside back and player of the match Mackenzie Haugh, who helped win a national title with the Otago rugby league team this year, made some incisive runs and scored the first try.

Jack Leslie, son of former Otago and Scotland midfielder John Leslie, slipped through a half-gap, got his right arm free and flicked off a wonderful offload to Haugh, who did the rest.

The Bush Pigs dominated the opening 20 minutes. But the Bantams replied through Lagen Kumeroa, who crashed over from close range in pretty much his side’s first incursion into the 22m.

With halftime nearing, the Bush Pigs put up a bomb. Callum Grayling fumbled the catch and Josh Buchan scooped up the ball and ran 50m to score.

Leslie added a penalty before the break to stretch the lead to 16-10.

Tukapa closed the gap with a try to captain Liam Bernet from a lineout drive.

But Leslie kicked his side clear again with three consecutive penalties.

The home side was not done yet. Shaan Waite scored to set up a tense finish. But the Bush Pigs secured the win with a lovely worked move from a scrum 15m out.

Leslie got a short pass to Haugh, who cut through on an angled run and passed to Buchan to score the winner.

"When we strung together phases and got the ball out wide, we were pretty dangerous," Grant said.

"Mackenzie Haugh was outstanding ... and Jack [Leslie] has been impressive for the whole campaign for us. He has a cool head — a bit like his old man.

"But the big thing for us all season has been our defence. Their forwards really, really brought it to us.

"They really put us under pressure with their lineout and scrum. But we had the ability to hold on to the ball for long periods of time and we’ve got some pretty talented backs who can create opportunities."