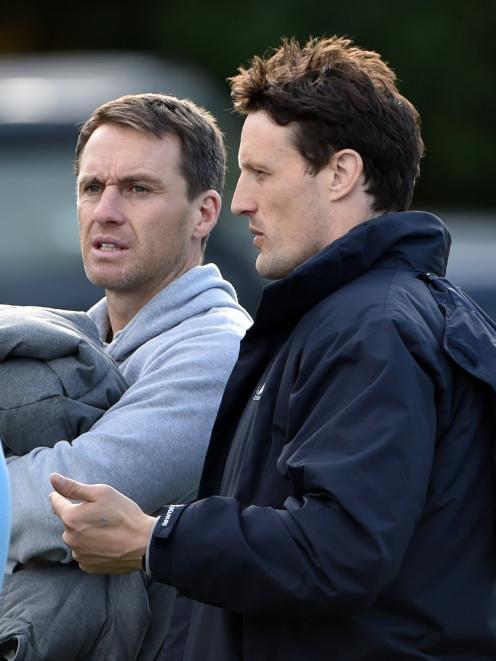 Dickson, the former back who played 46 games for Otago from 2008 to 2012, has just started as the King's High School director of sport.

The 32-year-old has returned from the United Kingdom, where he was based for six years.

Dickson said it was great timing for him and his wife, Anna, to return home.

"When we were both young we were brought up around grandparents and they were a big part of our lives. So we wanted to come home and have that for our children," he said.

"I was looking to come back. It got to the point I had achieved what I wanted at the club and they needed to spend more money to be successful. But then my wife sent me the ad for this job.

"I saw it and thought if this was my dream job after rugby then this would be it. I've got to have a go at this."

So Dickson sat down, got his CV in order and applied for the job. He had an interview, had to give a presentation and after a nervous wait, got the job.

He started a couple of weeks ago at the school, replacing Kane Jury, who has moved into professional coaching.

Dickson's wife and two children, Olive (3) and Lawrie (3 months), are due to come back from the United Kingdom in a couple of months.

Dickson left for England at the end of the 2012 season. He felt he had given it his best shot as a player in NZ and wanted an overseas experience. He had played a couple of pre-season games for the Highlanders but never played in a Super Rugby game.

He signed for Northampton in the English premiership.

"I blew out and had to have an operation on my hip. In the second year they said "we are not going to keep you on", so I needed to make a decision."

Dickson went down the coaching route and ended up at the Weston Super-Mare club on the coast near Bristol. He was a coach, player and development officer for the club, which is in the fifth tier of English rugby.

"I loved the coaching. Just the way you could feel like you could help people from your experiences ... we had some successes and were reasonably consistent."

He said there were frustrations around players not always being committed, but overall the club experience was great, like it had been when he first played for Pirates.

Dickson returns to Dunedin with Pirates no longer in the top tier and down to one women's team.

"It is a bit of a tough subject that one. Gutting really. A few clubs are struggling and we were the first one to go. Probably just a couple of years there not being active enough getting players, [and] guys' attitudes to the game and training [were] not great and it all sort of fell apart."

He had plans for King's to be a top performing rugby school and looked forward to working with players coming through to the first XV level.

There was also lots of other sports to get involved in. He wanted the school players to be committed and work hard for success.

His new job would not allow him to play again or coach a club team and anyway, his hips no longer lasted 80 minutes.

Dickson attended King's High School and played at first five-eighth in the first XV. Inside him was halfback Ben Smith - who would go on to play fullback for the All Blacks. The duo have now ended up making rugby their careers.