Rugby  fans were not the only people cheering the return of the Ranfurly Shield to Otago yesterday.

Dunedin bar owners desperate for more events in the city were elated with the result.

"It gives people an excuse to be able to go out and experience an event — something we haven’t had a lot of for quite some time."

He expected a good turnout for Otago’s shield defence against Hawke’s Bay on Sunday because of the draw of the shield.

"[It’s] great for the province because we get to create an event, even though it was going to be a home game on Sunday.

"But now we get to create an event around it. 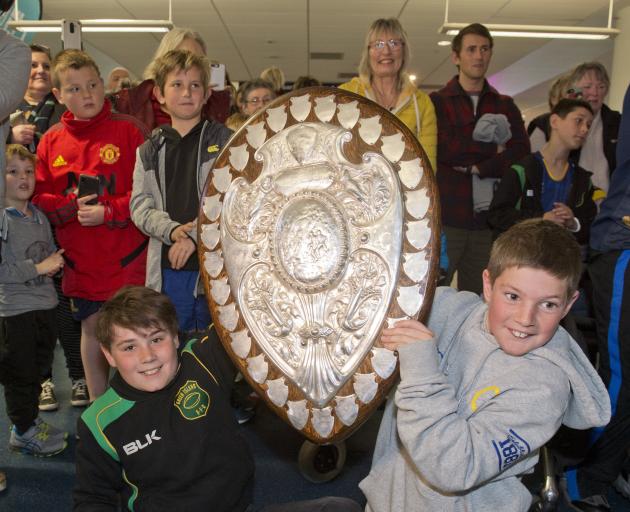 Felix Newell (11, left), and Aaron Hill (10) say it was amazing to get to hold the Ranfurly Shield after its arrival at Dunedin Airport yesterday morning. PHOTO: GERARD O'BRIEN
Mr MacDonald said he hoped the team could successfully defend the shield for a couple of rounds.

He said the past two months had been difficult for bars, cafes and restaurants in Dunedin, but the shield brought an opportunity for business.

"Even Level 2 ... has been very hard on lots of businesses.

"To get back to Level 1 with no restrictions, hopefully a big crowd. . . let’s hope they’re out and about on Saturday night.

Mr Scully also hoped Otago rugby fans from the wider region would stay in Dunedin for the weekend.

"There’s been very little at the stadium for people to come and enjoy.

"Of course, it’s not just about Dunedin people. It will attract people from around the province.

"They may stay for the entire weekend. Any excuse to bring them into Dunedin’s good."

The game against Hawke’s Bay on Sunday kicks off at 4.35pm.