Meanwhile, Rugby Australia has made its move to sack Folau, issuing him with a breach notice, with the Wallabies star set to see his contract terminated over his anti-gay social media posts last week.

As a result, Folau has been left fighting for his career with Rugby Australia set to use all their power to terminate his four-year contract.

Now, after initially indicating they would move to terminate Folau's contract, Rugby Australia have taken the next step.

"Following the events of last year, Israel was warned formally and repeatedly about the expectations of him as player for the Wallabies and NSW Waratahs with regards to social media use and he has failed to meet those obligations. It was made clear to him that any social media posts or commentary that is in any way disrespectful to people because of their sexuality will result in disciplinary action.

"All professional Rugby players in Australia are bound by the Code of Conduct and there is a process in place for any disciplinary matter. We appreciate that this particular matter will attract significant interest, but due process must be followed."

Folau has 48 hours to respond to accept the sanction or have the matter referred to a Code of Conduct hearing.

Speaking to the media at the All Blacks foundation day in Wellington today, Hansen said he believed Folau had incorrectly dealt with the situation.

"I think we all know what he's said isn't right ... it's been dealt with pretty strongly by his employers," Hansen said. "He's got the right to have an opinion but I think he's probably let himself down with how he's gone about that.

"He firmly believes it so he's just missing one piece of the jigsaw puzzle I think."

Hansen agreed that Folau would be a loss to the Wallabies if Rugby Australia were to terminate his contract. 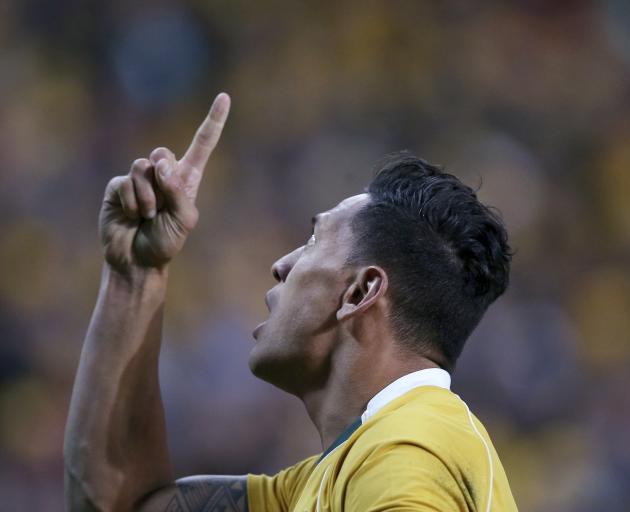 When Israel Folau made similar remarks in 2018, he escaped with a warning but no sanction. Photo: AP
But opening up for the first time since making the post, Folau said what becomes of his rugby career was now purely God's will.

"It's obviously a decision that's in the process right now but I believe in a God that's in control of all things," Folau told the Sydney Morning Herald.

"Whatever His will is, whether that's to continue playing or not, I'm more than happy to do what He wants me to do.

"First and foremost, I live for God now. Whatever He wants me to do, I believe His plans for me are better than whatever I can think. If that's not to continue on playing, so be it.

"In saying that, obviously I love playing footy and if it goes down that path I'll definitely miss it. But my faith in Jesus Christ is what comes first."

Rugby Australia had earlier released a telling joint statement with the NSW Waratahs.

"Our joint position regarding Israel Folau is unchanged," it said. "Following today's meeting, the two organisations will update their respective boards on the matter to consider next steps." On Friday evening, the NSW Rugby Union doubled down with its own statement, saying Folau had been stood down.

"NSW Rugby Union has stood down Israel Folau from all player duties with the NSW Waratahs until further notice."

RA and NSW Rugby had on Thursday night said Castle had been unable to "directly contact" Folau to advise him of her intention to terminate his $4 million four- year contract.

He's let down the Jersey!