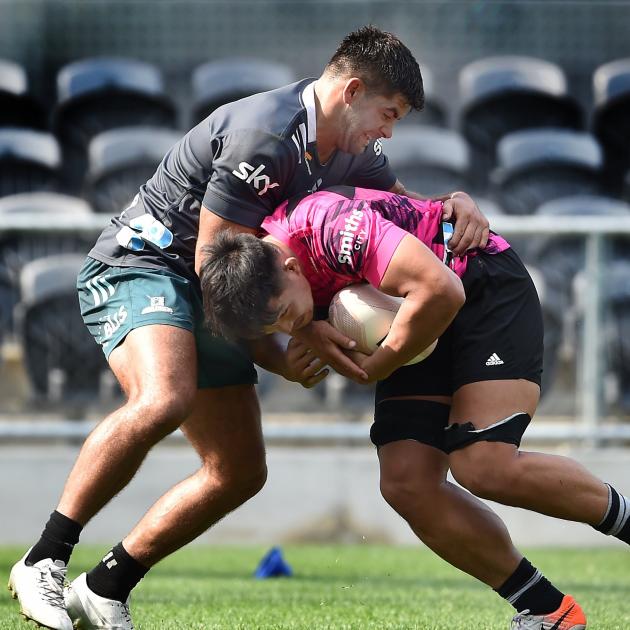 Highlanders flanker Billy Harmon (left) tackles prop Daniel Lienert-Brown at training at Forsyth Barr Stadium earlier this week. PHOTO: PETER MCINTOSH
Billy Harmon has journeyed down the road but his first assignment was to go up against some old mates.

Harmon, an openside flanker, is set to take to the field against the Chiefs tonight as the Highlanders go searching for the first win of their campaign.

The side came up short last week in its opening game of the season, losing 26-13 to the Crusaders.

The defeat was a tough one to take for Harmon, who had been with the Crusaders for three years before heading south for this season.

He said it was a different lead-up to the game.

"I know so many of them; I know their style of game well.

"But what a first opportunity for me to wear these colours and represent this city. It was a proud moment for me and my family," he said.

"There was a bit of nerves — like you get in any game.

"They were exactly what we expected.

"We put them under a lot of pressure and gave them just a few opportunities ... We didn’t get the win but we have learnt a lot from it."

Harmon never bagged a consistent starting role for the Crusaders and decided to sign with the Highlanders and get on the field more.

He admitted things were different in Dunedin.

"We’re out by the beach, just enjoying the city.

"When you start playing and getting regular time the body just feels better. You get time to go out and play."

Harmon grew up in Christchurch and went to St Bede’s College.

His older brother played in the same first XV as James Lentjes, now his rival at the Highlanders.

Harmon said it was not really a rivalry, as they helped each other out.

Lentjes is coming back from a long-term ankle injury but started a game for the first time since his injury more than a year ago when the Highlanders Bravehearts played a Crusaders development XV at Pleasant Point.

Harmon, who has toured with the Maori All Blacks, has been under the tutelage of new Chiefs coach Clayton McMillan, and he is expecting McMillan to have his troops all ready for the match in Hamilton.

"He is an awesome leader.

"No doubt he will have them all ready to go.

"He’s definitely a coach that lets players be themselves — they’ll be ready to show that."

Harmon will face a tough opponent tonight in All Black captain Sam Cane, but such is the shape of the game these days that they may barely come across each other on the field.

Standout Chiefs loose forward Lachlan Boshier has a foot injury and is unavailable for the game.

The weather forecast for Hamilton today is a chance of showers and wind.