There is a rookie at fullback, a midfielder on the wing and a journeyman at first five — it is not ideal.

The Highlanders have been forced into more tinkering ahead of their critical game against the Rebels in Melbourne on Sunday.

The five-week suspension dished out to Sam Gilbert earlier this week for a tip tackle on Michael Hooper during the 32-20 loss to the Waratahs in Dunedin on Sunday has left the side scrambling for answers ahead of what potentially shapes as a sudden-death game.

With regular first five Mitch Hunt ruled out while he recovers from concussion, and fullback Connor Garden-Bachop also suffering concussion symptoms, there is not a lot of wriggle room left for the Highlanders.

Utility Scott Gregory has the flu and was not available either. 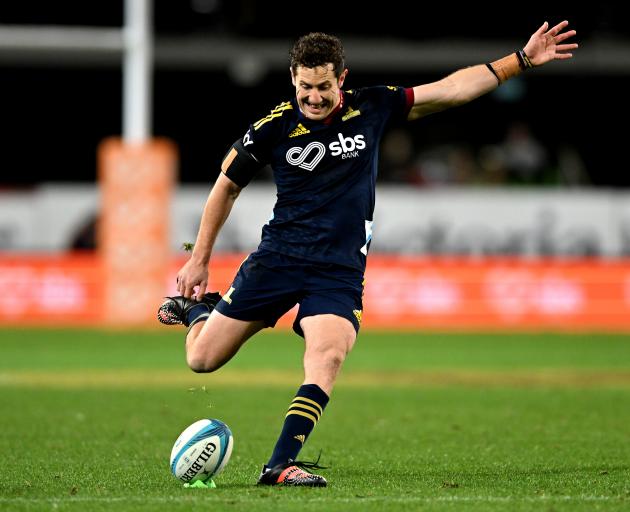 Veteran Marty Banks has been trusted in the No 10 jersey and replacement player Liam Coombes-Fabling will slot in at fullback.

Midfielder Fetuli Paea has been named on the wing. He has filled in there before this season, but looks a lot more comfortable closer to the ruck, where his physical game is best suited.

There is some good news for the Highlanders. Thomas Umaga-Jensen has recovered from a back complaint and will team up with Josh Timu in the midfield.

The pair combined nicely in the 61-10 win against the Force two weeks ago, so coach Tony Brown will be hoping for a similar performance from the duo this weekend.

The Highlanders are holding on to the final playoff spot in eighth place with a round to go. But the Force is in ninth place and will leapfrog the Highlanders if it beats the Hurricanes in Perth on Sunday and the Highlanders lose to the Rebels.

There is plenty at stake and Banks is in the pivotal position. He has plenty of experience and a good kicking game.

But a couple of weeks ago he was overlooked for Gilbert, who had never played top level rugby at first five.

Utility Vilimoni Koroi has been named on the bench as cover.

Brown has confidence in the players asked to step up.

“We’re pretty lucky to have a player like Banksy to call on," he said.

"He’s got big game experience, a calm head and an educated boot and with Thomas and Timu combining outside him, we’ll have a few options to keep them guessing.

"Liam plays fullback for Waikato and has been pretty awesome for us coming off the bench or when he has been given the opportunity."

There are a couple of changes in the front row. Loosehead Ethan de Groot returns from a break and Andrew Makalio replaces the injured Liam Coltman at hooker. Coltman picked up a calf strain against the Waratahs.

Lock Bryn Evans is back in the line-up after a week off, and the remainder of the pack has a familiar look.

All Blacks loose forward Shannon Frizell injured his knee earlier in the season, but will play club rugby for Taieri this weekend. If he gets through that game he will be available for the Highlanders should they make it into the playoffs.

It will be a nice occasion for prop Daniel Lienert-Brown.

He will take the field for his 100th game for the Highlanders when called on from the bench.

Rebels coach Kevin Foote has made three changes to his starting XV.

Lock Josh Canham has been given the nod, Rob Leota replaces the injured Tamati Ioane in the backrow and Lukas Ripley will start on the right wing.