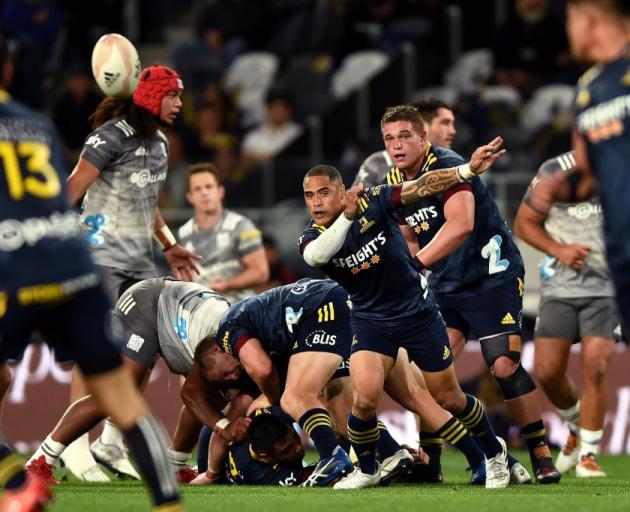 Highlanders halfback Aaron Smith clears the ball from a ruck against the Chiefs at Forsyth Barr Stadium on Saturday. Photo: Getty Images
The Highlanders are not completely out of the running in the Super Rugby Aotearoa competition.

The team has entered that dangerous territory of having to rely on other teams to get into the final, but all is not lost.

The side is in fourth place with two wins from its six games. It takes on the Blues at Forsyth Barr Stadium on Friday night and then has the bye. It will end the regular season on April 30 with a game against the Hurricanes in Wellington. If it wins both these games, it would finish on between 18 and 20 points on the ladder.

The Chiefs and Blues, which are both above the Highlanders, have three games left but neither side is safely into the playoffs.

If the Blues lose all three games or even just get the one win, the Highlanders could squeeze above them. The Blues have the tricky trip to Christchurch next week before a match against the Chiefs in Auckland to finish the competition.

The Chiefs have their next two games at home, and will then head to Auckland. If they only win one of the next three games and the Highlanders win both of their games, the Highlanders will finish ahead of them.

The Crusaders are unlikely to be pipped at the top of the table, but stranger things have happened.

It is perhaps a long shot for the southern franchise to get into the final, but then no-one expected the Highlanders to go out and smash the Crusaders on Good Friday in Christchurch.

The final on May 8 will be hosted by the side which finishes top of the ladder.

The Blues are expected to be without regular captain Patrick Tuipulotu on Friday night. He is struggling with a shoulder injury and did not play the last match for the Blues, a win against the Hurricanes.

Meanwhile, Hurricanes captain and All Black loose forward Ardie Savea is expected to be out of the game for up to eight weeks. He has torn the medial collateral ligament (MCL) in his left knee. He suffered the injury in the early stages of the second half of last Sunday’s game against the Crusaders.