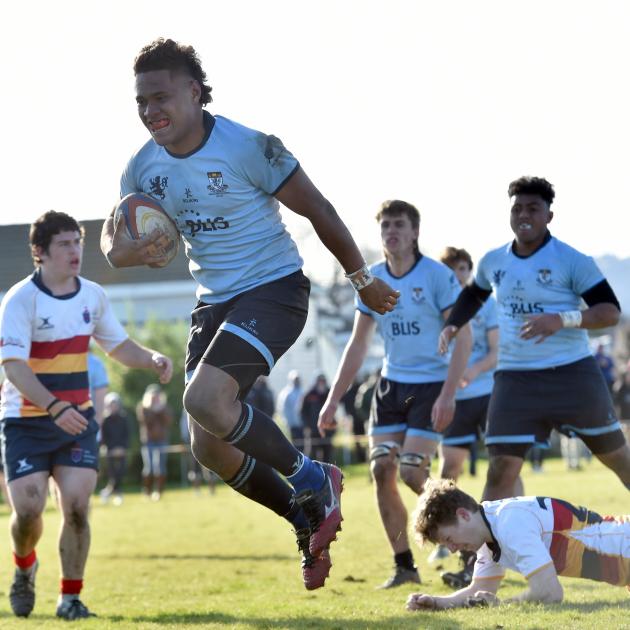 Heading to the try line for the King’s High School First XV last year is big No 8 Joji Buli in a game against John McGlashan College at King’s High School. Photo: Peter McIntosh.
A move to Japan usually involves players nearing the end of their careers, players who have reached the pinnacle and coming down the other side.

Ben Smith, Rob Thompson, Adam Thomson, Richard Buckman, Tom Franklin, Kieran Read — the list goes on and on and on.

But increasingly clubs and companies in Japan are looking to get players at a young age and get them over to Japan to have a look at them and see what they have in terms of ability and attitude.

Wiser to invest in them young, the thinking goes, and see how they pan out.

The club can then have a player for a decade or more when they are at the peak of their career rather than a player who has a limited life span and had lost that dash of youth.

Japanese captain Michael Leitch is an example. He went to school in Christchurch at St Bede’s College and then went on a school exchange to Japan when aged 15. He eventually went to university in Japan and has gone on to an impressive international career.

The trend is continuing, and a star for last year’s King’s High School First XV is heading for Japan.

Joji Buli played No 8 for King’s High School First XV last year, scoring plenty of tries, and the big Fijian made some aggressive and strong runs.

He was set to play club rugby in Dunedin but priorities have since changed.

Buli, who was born in Fiji, and attended King’s High School in the later years of his schooling, has come to an agreement with the Panasonic Wild Knights and will be heading to Japan in the next few months.

The club declined to make any comment about Buli and the agreement he has been given by the company club.

But it is believed he will be given a trial for the club and depending on how he impresses it may lead to a contract.

Many players are now heading down this route in the hope of a professional contract.

Amanaki Lelei Mafi (31) was born in Tonga but went to university in Japan, and has now picked up 27 caps for the national side there.

Japanese outside back Timothy Lafaele (29) went to De La Salle College in Auckland, but also went to university in Japan and gained Japanese citizenship in 2017. He played in the 2019 Rugby World Cup for Japan.