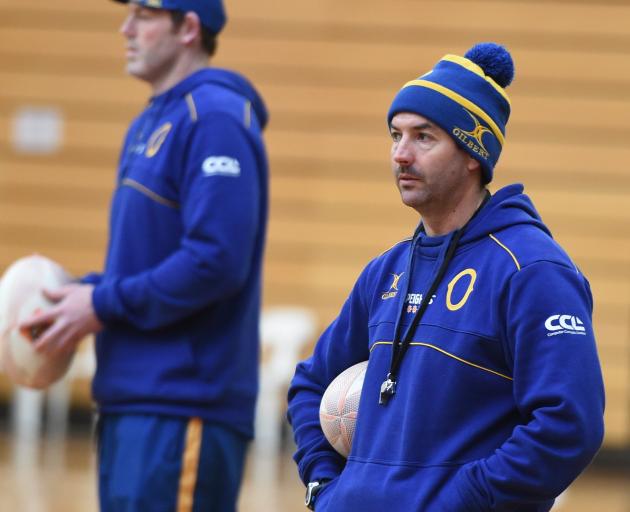 A dozen years later and Martin is coaching fulltime in a role in which he says he learns something every day. He also confirmed he has applied for the Otago head coaching role.

Martin has begun his second season with Otago as attack coach and said his years as a teacher had really helped his job as a professional coach.

"The 17 years of being a teacher has equipped me well. The skill set around your people management.

"In teaching, you make 300-400 connections a day with people and just with the time management, computer skills and planning. All those tools I used as a teacher are very helpful in the industry," he said.

Martin, in his late 30s, has returned from Singapore where he was head coach for the Asia Pacific Dragons, a fledging team in the Global Rapid Rugby Competition.

Being a coach for the first time, Martin said it was a great opportunity he could not turn down.

"Singapore had never had a professional entity so we were starting from scratch which I really enjoyed. So there was no real format in having a professional team. But it was an awesome learning experience."

Martin brought in players from around the world and said there were other challenges. Finding a field to train on was tough.

The heat made it hard to train in the afternoon so days became long as the team trained at night.

Being a head coach was also different for Martin.

"A lot of it is about dealing with stakeholders and sponsors, player agents, learning about your budgets.

"A head coach these days is more like the premier football managers in England - a lot of off-field stuff. Not as much at the coalface as a head coach.

"The challenge over there was we had quite a small management team so we had to be pretty multi-purpose."

He was now back in Dunedin and looking forward to the Otago season. The Ranfurly Shield had brought a higher intensity to the pre-season which he felt helped the team in its build-up to the Mitre 10 Cup.

"The Shield had amped up the pre-season. We kind of had to be into test-match mode straight away.

"The Shield brings out the best in the teams having a go for it. In a funny way, the Shield has been a blessing in disguise. We are further ahead than where we were last year."

Martin is the attack coach. In these days of rush defence and big hits, it is an involved role.

"The defence side of the game has become more important but I like that because you have to be be really creative in what you put out there in attack.

"You look at the profile of our team - not super big athletes but we feel we can manipulate defence, play that sort of chess match and find space by manipulating defence on the field.

"We have a hard-working forward park who do a lot of work in the middle of the field which gives us space out wide."

The goal for this year was to get to the next level.

"We're not being happy with what we did last year as our end goal was not completed. Ben has driven that. Sure we won the Shield but the job was not done."

Martin confirmed he had applied to be the Otago coach next year with Herring moving on. He loves to coach.

His first foray was when he was teaching at Outram School and he wandered down to help out West Taieri under-10s.

This year's OBHS side is doing well and Martin is a keen spectator.

"That is a good strong seventh-form group. They have some big games in front of them where they need to play a bit of test-match footy.

"Other teams will light up around them ... I have watched a few of their games but have let them do their work."