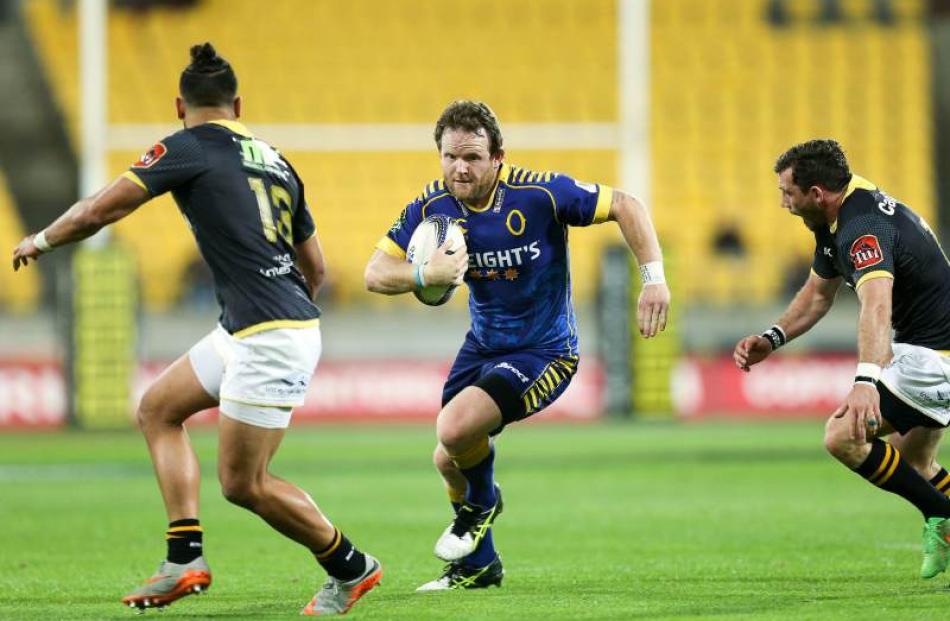 Peter Breen of Otago runs at Matt Proctor (left) and Jonny Bentley of Wellington during the ITM Cup semifinal between Wellington and Otago at Westpac Stadium, Photo by Getty

ODT Online rugby correspondent rates the Otago team after their 34-14 loss to Wellington.

Michael Collins 6/10: Not too many chances on attack and had to kick a lot of ball. Was fairly tidy.

Jayden Spence 6.5/10: Tried to get himself involved, made some good tackles and ran hard on attack.

Matt Faddes 7/10: The most dangerous runner with ball in hand, made a couple of good breaks. Defended well, making a couple of good tackles when his man got on the outside. Losing him at halftime was huge.

Tei Walden 6/10: Another who worked hard, had a couple of good carries and tackled well, although did not break the game open.

Jack Wilson 6.5/10: Did well on defence, particularly given he was marking Cory Jane. Had a couple of runs in the open with ball in hand.

Peter Breen 6.5/10: Had a couple of good runs, although was not able to set the backline alight with the stiffer Wellington defence. Kicking was solid, a bit surprising to see him taken off so early.

Josh Renton 6/10: Passed well enough and made a good snipe in the first half.

Naulia Dawai 6.5/10: Did not make his usual impact with ball in hand, although made a couple of good cover tackles.

James Lentjes 7/10: Made a few mistakes, but was prominent on defence with his tackling and did well to get through to score Otago's first try.

Jackson Hemopo 6/10: Got stuck in on defence and tackled well, although did not make the impact and provide the go-forward that was needed from him.

Tom Franklin 7/10: Otago's best in the lineout, while doing well around the park, making a few tackles and looking to offload.

Hisa Sasagi 6.5/10: Popped up on multiple occasions on attack, carried the ball well and provided good support. Made a few good tackles, although was beaten by Reg Goodes who ran a nice angle in what was a tough tackle to make.

Liam Coltman 7/10: Was everywhere around the field, ran hard and tackled well. Loses half a mark for some shaky lineout throwing.

Craig Millar 6.5/10: Got involved, made his tackles and supported play well.

Sam Anderson-Heather 5.5/10: Came on for the last 20 minutes, didn't make the same impact as Coltman, but was tidy. Hit the jumper to set up the maul which led to the second try.

Aki Seiuli 5.5/10: Struggled a bit in the scrum, did a few things around the park although not hugely influential.

Adam Knight 5.5/10: Scored a try from the back of a maul, but on the whole was pretty quiet.

Mika Mafi 7.5/10: Easily the best of the reserves, came on and made an impact through his strong carries and making tackles.

Kaide Whiting 5.5/10: Tidy, passed well, didn't do a lot wrong although didn't spark a lot either.

Fletcher Smith 5/10: Didn't add the spark he has shown in recent weeks, although was tidy. Kicked one penalty too far into the corner at a crucial stage.

Tony Ensor 6.5/10: Had a few good runs with ball in hand and nearly sparked something with an offload which went forward.