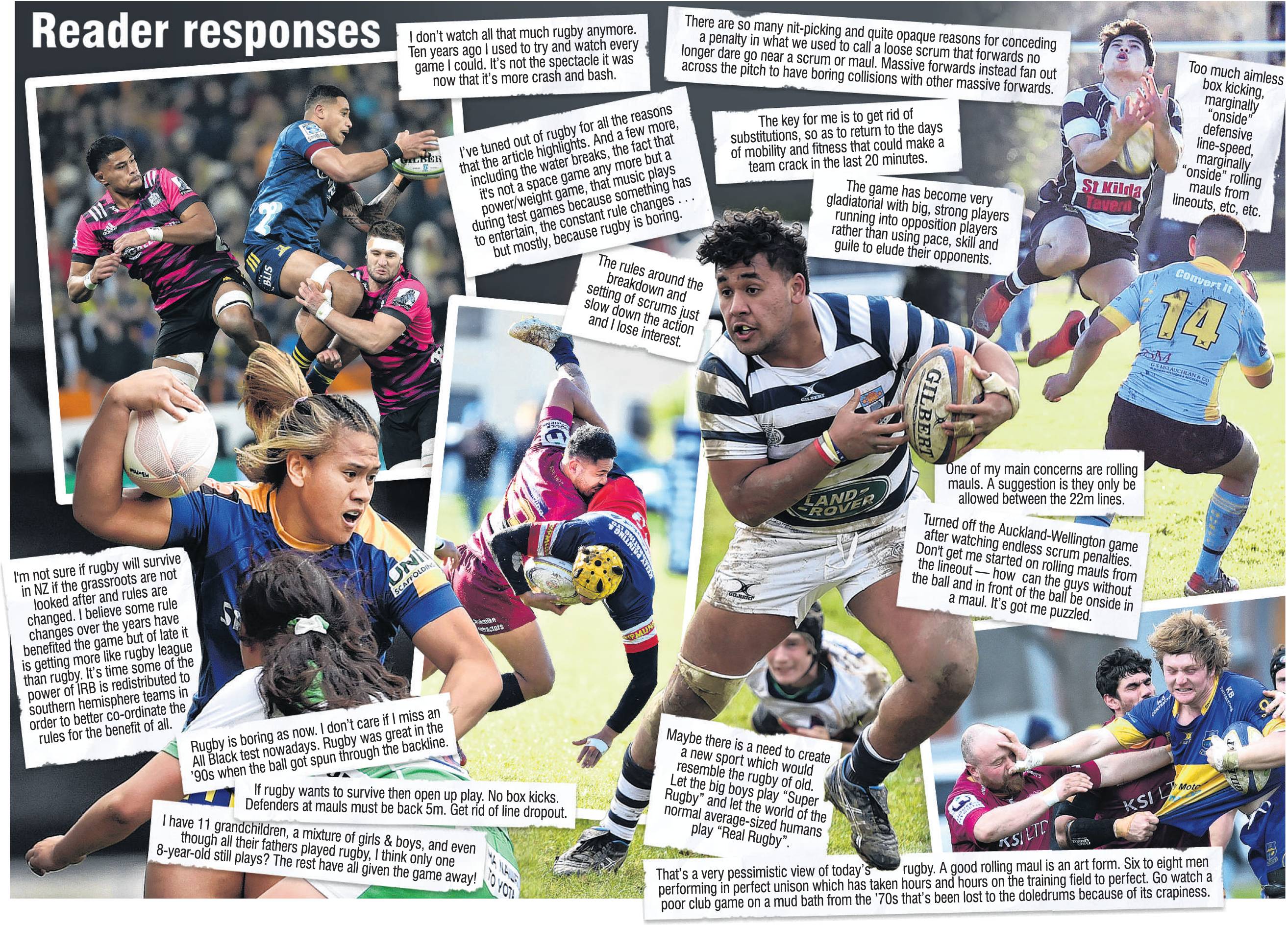 It may well be time for a change - but good luck in trying to get that change through.

The Otago Daily Times published an article earlier this week about the state of rugby and the way the game is played.

It highlighted how structured the game is, how defence is well ahead of attack and how the game is dominated by big men, who stand in the middle of the field and knock each other over.

Former All Black and All Black assistant coach Earle Kirton also said he found the game boring and worried about the future as so few youngsters were playing.

Plenty of readers chimed in with their views about the way rugby has been led down a path far away from what used to be played.

They say the only thing certain in life is change but many readers are not comfortable with the changes seen on the rugby paddock in the last 25 years or so.

Peter Becker said the changes have been happening quietly for a longer time than most realise.

"When my youngest son was playing over 25 years ago, the question we would ask him after a game was, ‘Did you score any tries?"’

My father had always asked the same question of us when we played in the ’50s, ’60s and ’70s, as that was what all players strove to do when playing? Score tries! My son seemed surprised by the question and replied thus, ‘No, but did you see the big hits I did on so and so?"’ Becker said.

"Defence was already the main thought that kids took to the game, and ‘big hits' mattered, not who scored tries."

Dunedin reader Murray Davidson said he went to Forsyth Barr Stadium with his son and grandson.

"They must get tired of me bemoaning the same old things each game — players in front of the kickoff, borderline offside in the midfield as backs try to make some progress (are all assistant referees biased in their officiating?), aimless kicking, and as for scrums!" he said.

"Rugby was for a long time recognised as the sport that had a place for all sizes and body types. Where would the likes of Terry Wright and Rex Smith fit in today’s game? That is no longer the case. The traditions of the game have been eroded by the professional era."

Another reader, Brian Snell, suggested perhaps the game should have two versions.

"Bring back some of the old rules for Real Rugby and get our backs scoring tries once again, and especially get those backlines standing back at least 10m and not right up the No8’s backside."

Brett Burgess raised the point of how good the game was in the 1990s.

"During lockdown Sky played games from the ’90s. My kids, who are rugbyheads, were absolutely fascinated by the speed and open running rugby. The accuracy wasn't of today's standard, but who cares — it was exciting watch," he said.

There was a common theme to most complaints: the game is becoming like rugby league, the rolling maul is universally hated, as is the use of so many reserves. The size of players was questioned, as was the breakdown and too many penalties in any game.

Then there were those who simply no longer watched the game. Or if they did it was nowhere as often as they used to.

There was one voice who felt the game was nowhere near as bad as many think.

Owen Martin, of Timaru, said the game would change but looking back at one good game from years ago was not a true indication of rugby back then. He considered the rolling maul and power scrum an art form.

"The biggest thing I hear from the old guard is ‘the game’s gone soft’. Very few of the old guard played as many games with men the size of what they are now, the speed at which they travel and the power which they can hit," he said.

"Players needed to be protected as much as they can without losing the purity of the sport. Personally I think a game where you can smash someone as hard as you can, but try and wrap the arms and keep away from the head is a perfectly acceptable situation."

The biggest worry for many was voiced by those who said their children or grandchildren simply no longer played or had any interest in the game.

Player numbers appear to have remained steady, according to New Zealand Rugby, though in a few key areas they have declined

Sport and rugby, though, is like life. Everything evolves and changes. At the moment it has evolved into something many do not like.

But those at the top will point to record viewership at the last World Cup and record uptake of the game worldwide. New rules are trialled every four years and most never get past first base. There appears no hint of revolution in the ranks of World Rugby.

One thing about rugby which has not changed is going backwards never worked — on or off the field. Unfortunately for those of us who long for the game from a generation or more ago, that game has been well and truly kicked into touch.

- A group, including former All Blacks and club players, has started a campaign around the impact of the professional game on the amateur game. The group, led by Wellington businessman Doug Catley, is asking for thoughts to be emailed to: dhcatley@catleyinvestments.co.nz

If u want running rugby, swallow your pride and follow rugby league by dropping the loose forwards, whose main job seems to be to quickly stifle the opposing backline.

There is nothing sacred about the number 15. There are too many players on the paddock.

Rugby, is that the oval ball or the round one?