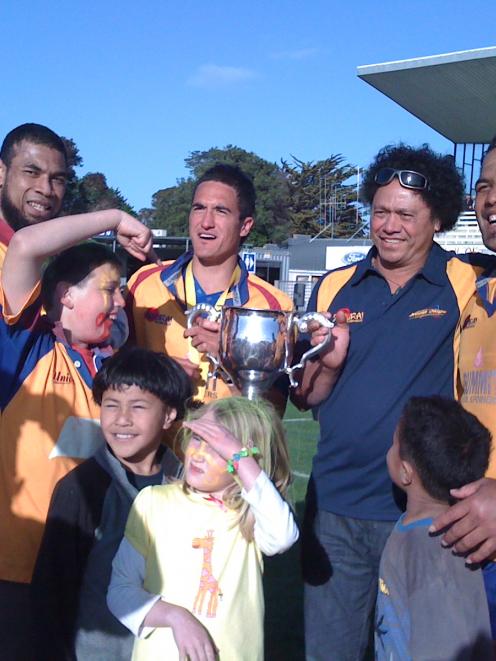 North Otago finished top of the standings in pool play and entered the match as slight favourites, and they more than lived up to that billing with a six tries to two victory over a Wanganui team seeking a Meads Cup three-peat after title wins in 2008 and 2009.

The home team did the hard work playing into a strong wind in the first half, capitalising on their opportunities while turning over Wanganui ball at crucial times to score three tries and lead 17-13 at halftime, despite struggling for territory.

They eased away with the wind in the second half though Wanganui threw everything at them in the final 10 minutes and they scored through impressive wing Cameron Crowley, which drew them to within nine points.

But wing Greg Zampach replied with a tidy finish in the corner after some quick hands from the backs to seal the match for North Otago, and fittingly captain Luke Herden iced the cake with an intercept try in the last minute, his 12th try of the season.

Veteran flanker Ross Hay kicked the final conversion, perhaps a sign his 126th match for the province will be his last.

Barnstorming No 8 Tevita Fifita was outstanding for the victors and led a spirited and cohesive forward effort, which was the key to the province's first Meads Cup title since 2007.

It also capped off a remarkable turnaround from last year, when they missed out on the top six on their way to a Lochore Cup win.

Wanganui made the perfect start, winning the kickoff and maintaining possession for nearly 3min before the pressure told on the North Otago defence and fullback Ace Malo crossed out wide to open the scoring.

But the home team made the most of their opportunities and scored almost every time they ventured into Wanganui's 22.

Halfback Kilifi Fangupo drew them level after 11min when he darted over from close range, but a 52m penalty from Wanganui first five-eighth Mark Davis restored the visitors' lead.

It was shortlived, however, as Fifita's blindside burst and skilful offload sent flying wing Lemi Masoe away down the flank.

Davis' boot nudged Wanganui ahead again but there was a turning point in the 36th minute when their influential halfback, Denning Tyrell, was sinbinned for playing the ball on the ground after North Otago's forward pack had marched a rolling maul to within 1m of the line.

The home team opted to kick for touch from the resulting penalty and Philpott finished off a well-worked lineout move.

First five-eighth Ben Patston struggled with his goalkicking into the wind and he missed two more penalties early in the second half but the 'Old Golds' were doing it in tries and prop Palanapa Mafi barrelled over from a ruck to score their fourth five-pointer inside 50min.

Patston finally found his range -- from 55m, as it transpired -- as he nailed a monster penalty to stretch the lead to 14 points.