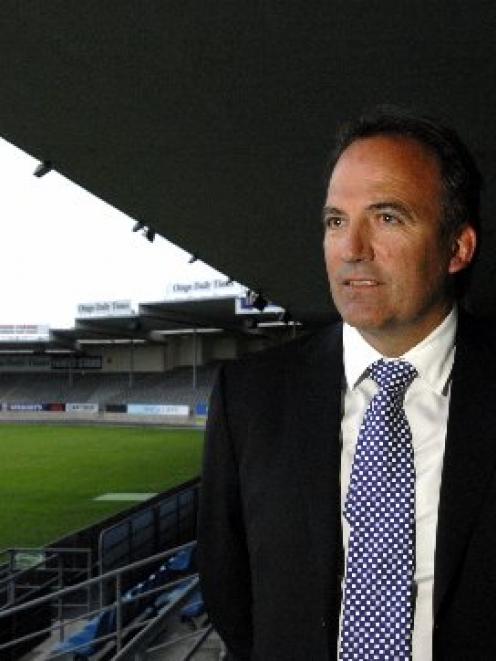 New ORFU chairman Wayne Graham says Otago rugby has 'lost touch a little' and he aims to remedy that. Photo by Gregor Richardson
Two former All Blacks will lead the Otago Rugby Football Union board. Wayne Graham was elected chairman last night at the first meeting of the new board, while former All Black coach Laurie Mains is the new deputy chairman.

Both are relatively new to the board, with Graham elected last year and Mains last month.

Graham takes over from Ron Palenski, who is no longer on the board, while Mains replaces Adrian Read, who remains a board member.

Graham (52), who played eight games for the All Blacks, including one test, said it was an honour to get the job.

"With the sort of board we have here, we are putting a group of people together who have some credibility, who know rugby, and hopefully know what it is going to take to get the Otago people back to Carisbrook," Graham said.

Mains (64) said he was excited about the strengths and diversity of the board, and the willingness to all work hard for the sake of Otago rugby.

He was not interested in becoming chairman, as it would be too difficult because he lived in Queenstown.

He owns a real estate company in Dunedin.

He said the priorities of the union were to retain and recruit quality players, winning and "getting back in touch with the public and rugby people" in Otago.

"We have lost touch a little.

"A lot of people have become a little bit disillusioned about the direction it was heading.

"Otago country rugby was left in the dark and we were not getting into the schools and bringing the younger players through."

Graham admitted winning games meant a lot in gaining support - "you only have to look at the Phoenix"- but he said it would not be a quick fix.

"But we want to do it as quick as we can and we haven't got a lot of time.

"With our small population we have got to be united.

We're not big enough to have divisions in the province."

Graham said one of the first priorities was to make sure the Otago team finished in the top seven in this year's national provincial championship.

Mains, who played 15 games for New Zealand including eight tests, and later coached the side between 1992 and 1995, said the board felt he would be a good deputy chairman to Graham as he had experience within Otago rugby, and could help out Graham, who still had to run a business.

Dunedin businessman John Faulks was appointed to the board last night, as an independent member.