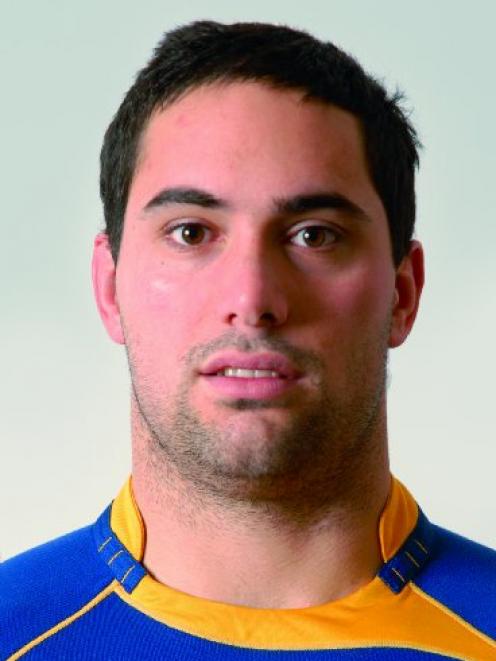 Karne Hesketh.
Otago winger Karne Hesketh is off to play in Japan and there is a chance he will be joined by captain and openside flanker Alando Soakai.

Otago Rugby Football Union chief executive Richard Reid said he had been informed that Hesketh would not be signing with the union, and was heading for Japan.

Neither Hesketh nor his agent, Warren Alcock, could be contacted yesterday, but after he failed to land a Super 14 contract, a move overseas was always on the cards for the hard-running winger.

A product of Napier Boys High School, Hesketh first played for Otago in 2006, making his debut against Hawkes Bay at Carisbrook.

The explosive Alhambra-Union player had an ability to break tackles, and was a real handful for opposition defences.

But there were always question marks about his defensive abilities, and he often found himself in the wrong position when trying to defend the flanks.

Otago is not drowning in wing options but has the likes of Fetu'u Vainikolo, Ryan Shortland and Jeremy Cave to fill any vacancies.

Ben Smith plays on the wing for the All Blacks but is used at fullback by Otago.

Reid said negotiations had been going on since October last year with Soakai and his agent but had yet to reach a conclusion.

"We would like Alando to stay and we are still talking to him. But he is a 27-year-old rugby player in New Zealand who has a judgement call to make on his future," Reid said.

Soakai is believed to be weighing up offers from overseas clubs, including Japanese teams, and if he left it would be a big blow for Otago.

He captained the side last year, and has impressed in his time in both the Otago jersey and the Highlanders.

He has played 48 games for Otago and 32 games for the Highlanders.

Reid said the union had 17 players on contract and another five under offer.

Inside back Glenn Dickson had agreed a contract with the union last week.

Reid said players could come into contention during the club season and pick up contracts.

Reid said the days of Otago having more than 30 players on contract were long gone but the contracts would be finalised near the middle of the year.

The union had to name 26 players by the middle of July for the New Zealand Rugby Union for the national provincial competition.

Reid confirmed the union was still looking for a second five-eighth, and was not close to signing anyone.