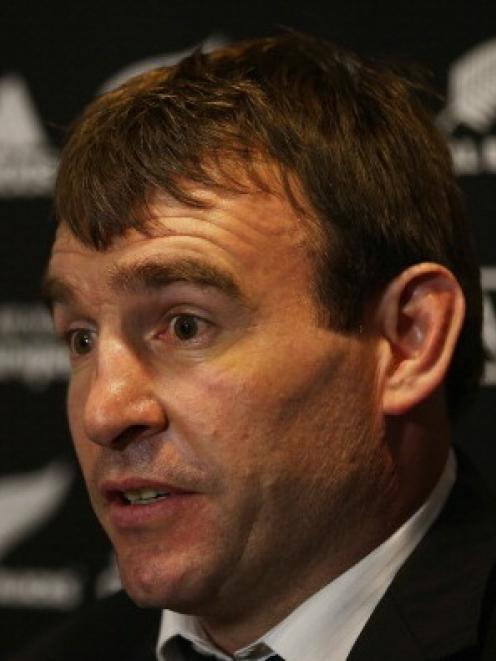 Andrew Hore of the All Blacks faces the media during a press conference after his ban. (Photo by Hannah Johnston/Getty Images)
Banned All Blacks hooker and Highlanders captain Andrew Hore has been subjected to "ignorant" comment and has endured the longest week of his life, two of the men closest to him say.

Hore, the Highlanders' captain, was banned for five weeks after a judicial hearing in the United Kingdom yesterday found him guilty of striking Welsh lock Bradley Davies in the first minute of the All Blacks' 33-10 victory in Cardiff last Sunday.

The eight-week suspension was reduced to five on the grounds he had shown genuine remorse by apologising to Davies, and had a clean record.

His Dunedin-based agent, Warren Alcock, said some of what had been said about Hore in recent days had been incorrect and out of line.

"A few years ago, Ian Jones had to appear in front of the judiciary and he talked about the incident before the hearing. He was roundly criticised by the judicial officer.

"People are calling him [Hore] a thug but he has played near-on 300 games of first-class rugby, and I've watched the majority of those, and you would certainly never call him dirty or a thug."

Alcock said Hore had admitted he was wrong, but it was time for people in the South to support the player.

"This guy is from Otago and has achieved a hell of the lot in the game. We should be proud of what he has achieved. I'm not trying to mitigate what has happened but we need to remember the contribution this bloke has given to rugby."

Alcock rejected any suggestion the ban was soft because three of the five games during the suspension would be pre-season matches.

"People clearly underestimate the importance of pre-season games. Andrew wanted to work as hard as possible in the pre-season to make the season a success.

"And he is going to miss the first competition game. That is an important game. It is not an insignificant game."

Former Hurricanes, Taranaki and Cardiff lock Paul Tito, who has played with both Hore and Davies, said it was hard to believe some of what he had heard over the past few days.

"I heard on radio he [Davies] had been in hospital for two days after the game," Tito said.

"Well, I talked to him that night at 10pm and he was at home. Sure, he won't play this weekend, but he will be right the next week to play the Heineken Cup.

"He accepts it is part of rugby and has had texts every day from Andrew."

Tito had been in contact with Hore this week.

"He is in a place where I have never seen him before. He is the most down that I have known Andrew Hore to be.

"It has hit him very hard and been a real kick in the guts. The longest week of his life."

Tito said Hore loved playing for the All Blacks and that was what kept him in New Zealand.

Hore will return home with the All Blacks team next week.

Alcock said the best thing for him would be "to get back to the farm".