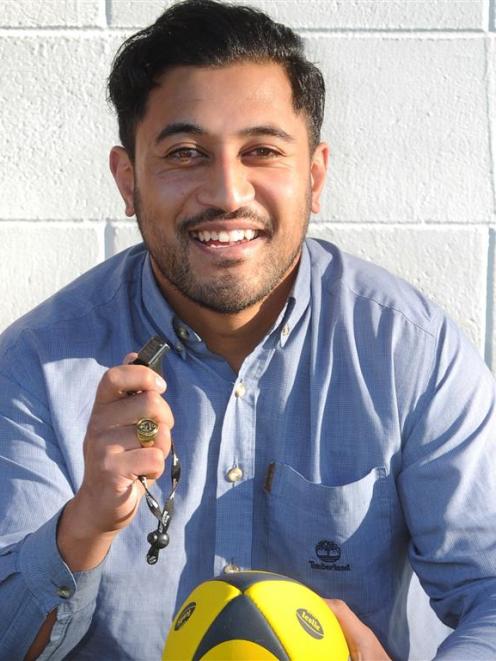 Former Dunedin player Tumua Ioane will referee his first game of premier club rugby tomorrow. Photo by Christine O'Connor.
Tumua Ioane always thought he knew more about rugby than the referees controlling his games, and now he has the chance to prove it.

Ioane (26), who played more than 100 premier games for Dunedin from 2008 to 2015, will referee his first premier club rugby match when Pirates plays Kaikorai at Hancock Park tomorrow.

But when he stopped enjoying playing the game towards the end of last season, Ioane looked for another way to get his rugby fix.

"I knew I wanted to stay in the game but I just knew I wasn't enjoying the playing side of it.

"This is just another way to stay in the game. And there's not many of our Pacific Island brothers out there doing it, so it's another pathway for them as well, if they see me out there.''

He is not afraid to admit he was never short of a word as a player, and was enjoying being on the other side.

"I was one of the worst when I was playing. I gave them [referees] a fair piece of my mind.

"I did think I knew a lot, a heck of a lot more than the refs, and I paid for that a few times.''

Ioane also makes no secret of the fact he is a Dunedin boy through and through, and that it still hurts when someone mentions the 2012 final, in which Highlanders first-five Hayden Parker nailed a last-minute penalty to snatch the title at Forsyth Barr Stadium.

While he never lets that passion get in the way of his refereeing, there had been times when his ties to the club had raised some eyebrows, he said.

"I had a bit of a tough time reffing the premier two game between Taieri and Dunedin [two weeks ago].

"Taieri thought I'm still wearing a Dunedin jersey, so I copped a bit of flak out there.

"But it's been great. The players have been pretty positive. I wouldn't say it's easy to ref but it's good when both teams are being pretty positive about it.''

Ioane felt players appreciated he was a former player and he enjoyed striking a rapport with them.

However, he was conscious of not letting things get "too loose''.

Refereeing is far from a pastime for Ioane and he has set himself some lofty goals.

"Realistic or not, I've got them and I'm not afraid to tell people about them.

"I want to be at the next Olympics. I don't know if that's going to happen, but that's a big goal of mine.''