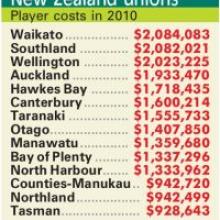 Otago spent more than $1.4 million on players last year but was the union which spent the least, considering what it could have.

The New Zealand Rugby Union released salary cap statistics this week from the 14 unions which took part in the ITM Cup last year.

The three biggest spenders were Waikato, Southland and Wellington. After calculations, Southland was found to be the only union which had breached the salary cap, going over by $2399.

Otago spent $1.407 million on players last season. That was made up of mainly of wages, along with other expenses, such as travel allowances and accommodation allowances.

It was the eighth-biggest spend by a union, with Waikato top and Tasman bottom.

Waikato and Southland both ran into severe problems in the past financial year and asked for help from the NZRU.

After adjustments through loaning players, discounts for having All Blacks and veteran players, and injured and loan players, it was calculated the Otago salary cap payment was $855,950.

Otago Rugby Football Union general manager Richard Reid said it was deliberate the union spent well under its salary cap, as it wanted to be prudent and was not willing to pay more for players.

Last year was a year of transition, with the new salary cap of $1.35 million or 36% of the union's income, whichever was less, being introduced.

The most a player could be paid under the new salary cap was $60,000 but many players were earning more than that.

The adjusted figures though had incomes capped at $60,000.

Reid said even the lowered salary cap was too high.

"It should be somewhere around the $1 million mark. Players can have an income of anywhere between $15,000 and $60,000. We are getting a bit low down the tree to be paying players that sort of money," he said.

He said Otago would not be over the salary cap this season. He declined comment on other unions' performance.

The NZRU board and management decided Southland should not be penalised for its salary cap breach as it was caused by having to honour existing contracts.

On a rough calculation, the average income for an Otago player last year was about $41,000, while Southland and Waikato players averaged more than $60,000.