Rugby: Otago gets up to make final 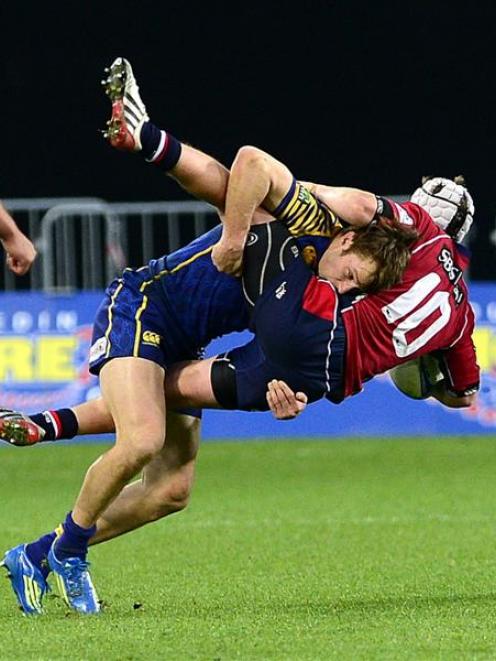 Otago got home in a thriller at Forsyth Barr Stadium in Dunedin last night, winning 41-34 over Tasman and is now in the final of the ITM Cup championship.

But jeepers, it was a see-saw battle.

Otago started like a house on fire, went to sleep, came back, then shot itself in the foot, twice, before coming home like Kiwi in the 1983 Melbourne Cup to win the game.

With 20 minutes to go Otago looked dead and buried but kept calm just at the right time to win the game.

Otago coach Tony Brown said the side showed great composure when things did not look like going its way. 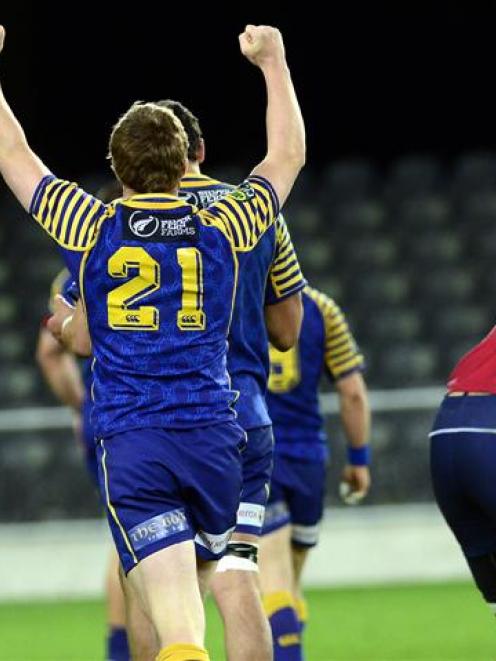 Otago second five-eighth Glenn Dickson (left) and replacement back Michael Collins raise their arms in triumph at the end of the game in front of dejected Tasman lock Filipo Levi (right).
"We have had an attacking mindset all year and it showed out there tonight we can come back from anything. It was just attitude..If teams come here they need to be prepared to play for 80 minutes," he said.

"I think it was great leadership from Dicko [skipper Glenn Dickson] who made all the right decisions out there. He kept the belief up for the guys and we did well for them."

The Otago side made a slow start and did not get a lot of ball in the first half but hung in there to be down just 19-15 at the break.

"We told them at halftime to just go out there and start playing. I think that it was they did. In the first half Tasman just did not give us the ball much."

Brown paid tribute to prop Jacob Ellison, who came on with just over quarter of the game left and made some big plays.

"It was fantastic. He probably swung the game there, especially that scrum at the end. It is good to see him out on the park as he has had a tough season."

Brown was thrilled the spectators were allowed on the field at the end of the game, saying it was a great thing for Otago rugby.

He was unsure whether he would have all his All Blacks back for the final.

Otago had the momentum in the second half but threw it away twice by throwing a couple of intercepts as it was pressing on the Tasman line.

But the home side never threw in the towel. Halfback Fumiaki Tanaka scored a nice try from a lineout and then fullback Tony Ensor showed some great juggling skills to score as he flirted with the tryline with 15 minutes left.

Best for Otago was halfback Tanaka again, Dickson played well - he scored 21 points - and lock Rob Verbakel got through plenty of work. Hooker Shoat Horie made an impact coming on in the second half.

Otago had made a dream start with new boy lock Jackson Hemopo scoring after just four minutes. He barged over the line after Otago had camped on the Tasman line virtually from the kick-off.

But Tasman came straight back into the game with two long-range penalties from Andrew Goodman.

Goodman then helped himself to a try after 20 minutes.

Tasman broke through the line and when the ball landed in first five-eighth Hayden Cripps' hands he cleverly chipped wide when the Tasman captain caught the ball and went over without a hand being laid on him.

Tasman had the roll-on and the home side was struggling to keep up. Otago was rather hesitant in attack and did not protect the ball well enough around the breakdown. But Adam Thomson, making his return from All Black duty to the blue jersey, crossed out wide after some good work inside him to leave the home side still handy to the lead at the break.

Otago nearly scored on halftime but prop Aki Seiuli was pushed out within sight of the tryline.

The second Championship semifinal is in Pukekohe this afternoon between top qualifier Counties-Manukau and Southland.